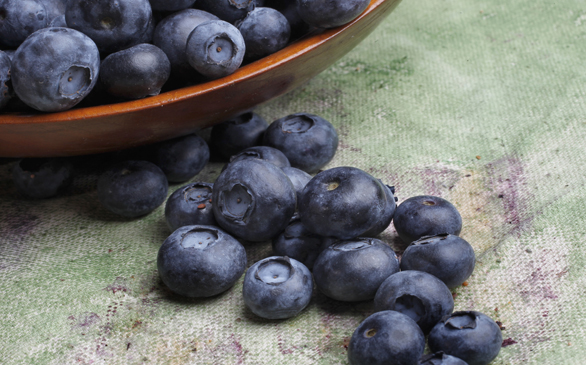 Younger women who ate at least three servings per week of strawberries or blueberries reduced their likelihood of suffering a heart attack by one-third compared with their sisters who incorporated fewer of the colorful berries into their diet, a new study says.

The berry benefit was sufficiently strong that it held even after researchers adjusted for age, high blood pressure, family history of heart attack, body-mass index, exercise, smoking, and caffeine or alcohol intake. Researchers suggested that a group of dietary flavenoids called anthocyanins, which give blueberries and strawberries their jewel-like colors, may be responsible for the health benefits seen in the study's large sample of subjects.

Anthocyanins are known to dilate arteries and counter the buildup of plaque that causes atherosclerosis.

The latest finding, published in the American Heart Association's journal, Circulation, comes from the Nurses' Health Study II. In that study, about 93,600 women ages 25 to 42 answered detailed surveys about their diets every four years for 18 years.

During the study period, 405 heart attacks occurred - a rate that is predictably low because the women in the study had not yet reached the age at which heart disease is most likely to show up in women. But the study subjects who ate the most strawberries and blueberries, three or more servings weekly, were 32 percent less likely to be among the group who suffered early heart attack than were women who ate fewer berries - even women whose diets were otherwise rich in fruits and vegetables.

"This simple dietary change could have a significant impact on prevention efforts," said Dr. Eric Rimm, professor of nutrition and epidemiology at Harvard School of Public Health and senior author of the paper. Rimm and his coauthors surmised that if berry consumption showed such measurable health effects early in life, its benefits were likely to show up later as well, when women's heart attack rate more closely approximates that of men.

The authors said they looked specifically at strawberries and blueberries because they are the most commonly consumed berries in the United States. But other berries, including raspberries, may have similar effects, they said.