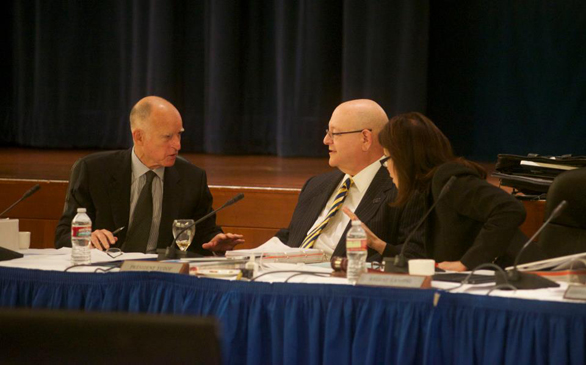 California Gov. Jerry Brown has a history of tangling with California's public universities, which pride themselves on their independence and typically snub direction from the Capitol.

As governor decades ago, Brown shook up the University of California Regents with such unconventional board appointments as music mogul David Geffen, a local YMCA director and a Zen Buddhist porpoise expert. He said faculty pay should be reduced because professors derive "psychic income" from their job.

Now he is challenging the University of California and California State systems again - minus the eccentricity. Brown hopes to use state purse strings to force down their expenses, hold the line on tuition and fees, and graduate more students more quickly.

He wants more teaching, less research and more online courses to save money and increase offerings. He says more students should be accepted from California's community colleges.

The universities must "reconfigure themselves so that they are more effective and they're able to do excellent work, but do it in a way that will not keep the costs escalating," said the governor, who attended University of California, Berkeley.

It is unclear whether the schools will go along. The public universities are among the few areas to which Sacramento devotes a great deal of money without much say in how it is spent. Relationships between governors and the two systems have traditionally been rocky.

In the state budget he proposed last week, Brown increased money for the two systems by more than $250 million each - less than they requested, but enough to avert tuition hikes in the fall, leaders of both systems have indicated. If they want more in the future, the governor said, they'll need to do as he asks.

Brown, who sits on the boards of both systems, will make his pitch to UC Regents in San Francisco on Wednesday and to the Cal State University Board of Trustees in Long Beach next week.

Some university leaders said they welcome his input.

"I personally am overjoyed," said Sherry Lansing, the former head of Paramount Studios who is now the president of the UC Regents. "For me, there's nothing better than to have the governor come so he can understand the problems that we're facing, and work with us to find some solutions."

In addition to a 12 percent to 18 percent funding hike in the coming fiscal year, Brown is proposing 4 percent to 5 percent increases for both systems over the four subsequent years if they will keep student costs steady during that time. He wants limits on the number of units that students can take, charging more for those who accumulate more credits without graduating. That, he said, would free up space for others to get courses they need to finish their degrees in a timely manner.

"I've got a whole book showing how the university is spending money it doesn't have to," Brown has said, referring to "certain kinds of research, sports, gardeners, a lot of things."

Former Regent Ward Connerly said the universities frown upon meddling by governors and other politicians, particularly in the UC system, whose independence is enshrined in California's Constitution.

"There's a feeling that this is our domain and the governor shouldn't be too engaged, shouldn't be playing in our backyard," he said in an interview. "That creates a tendency to resist."

Former Gov. Gray Davis, who served on both boards from 1995 to 2003 as lieutenant governor and governor, said academics "have a much longer time horizon and move much more slowly."

"If they don't want to do something you propose," Davis said, "they will just slow-walk you and wait for you to be out of office."

Even governors who enjoyed partisan majorities on the schools' boards have sometimes had their goals thwarted. In 1995, when Republican Pete Wilson was governor and the UC regents were mostly Republicans, they voted to end race-based admission practices. But Richard Atkinson, then the UC president, refused to implement that policy.

Brown has been working for months to cultivate university leaders.

Robert Powell, chairman of the UC Academic Senate, said he and other faculty leaders met for three hours with the governor in Oakland last fall.

"He was really drilling down," asking detailed questions about increasing summer courses, the obstacles students face to graduating in four years and the possibility of three-year degrees, Powell said.

But he was skeptical of Brown's hope that online courses would save significant money.

"You're not going to teach students more cheaply," he said. "No one has demonstrated an ability to do that."

Bob Samuels, president of the UC union for more than 4,000 lecturers and librarians, said his members were wary of where the governor's renewed focus on higher education may lead. History has shown, Samuels said, that Brown "is a very unpredictable person."

The governor says he'll be "listening a lot" as he pursues change, and his approach will be less sensational than in the past.

"Before when I used to go to the regents, I'd go armed and I was attacking," Brown said. "... You've got to be more subtle; you need more allies."