Dwight Howard is Starting to Feel It 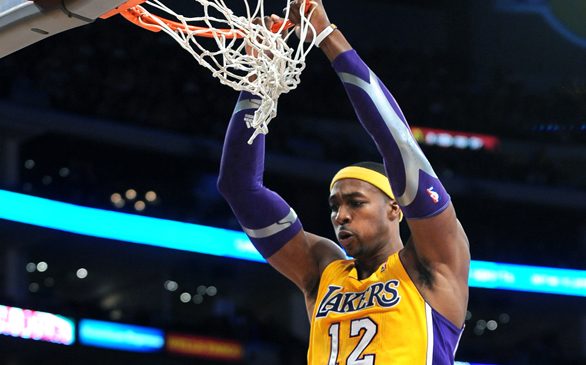 Dwight Howard is back. He’s beginning to regain his healthy form and resembling his previous role as the most dominant center in the NBA.

The 27-year-old posted 31 points, 16 rebounds and four blocked shots in the Lakers 104-88 victory over the Milwaukee Bucks on Tuesday night at the Staples Center (Kobe Bryant also scored 31 points).

After a three-game absence because of shoulder problems, Howard and the Lakers are riding a two-game winning streak as they prepare for a visit from the Miami Heat on Thursday.

In those two games, Howard averaged 26.5 points, 15 rebounds and 2.5 blocks per game. Sure, it’s only two games, but Howard is gradually illustrating his power and talent that led to the Lakers acquiring him and trading Andrew Bynum.

So, what does Howard think of the last two games?

“It’s been great. When we play the way we played these last two games, I don’t see anybody beating us,” Howard reportedly stated. “The problem is we have to do it on a consistent basis and not have any lapses during the game. We’re learning, but stuff like that takes time. The biggest thing, we’ve just got to stick together. We can’t let nothing on the outside tear us apart.”

Howard, who underwent back surgery to repair a herniated disc, has shown instances of thrilling energy. The Lakers, as a matter of fact, have depicted that same perpetual energy, especially in their last two victories.

No matter what the stats convey, the Lakers are slowly showing a lot of life. In fact, there’s so much life that an interior (post) and exterior (jumpshots) production now exist.

“We’ve been knocking down some shots and putting me on the same side with him when Steve [Nash] runs that screen-and-roll,” said Bryant of Howard’s post moves. I’ve knocked down some shots, and it frees him up and makes it a lot easier to get some baskets.”

But Howard’s success thus far could also be because he’s finally getting stronger and in shape.