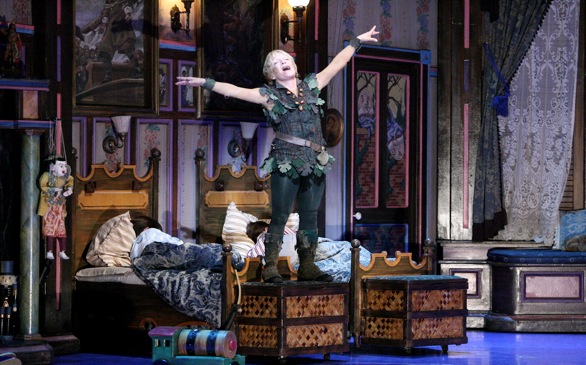 The Pantages Theatre is teeming with youngsters. Small boys are wearing little jackets and have combed their hair; petite girls are donning their Sunday school dresses and filling their purses with the useless trinkets we think should fill purses at that age. They are running up and down the aisles, candy, booster seats and parents in tow. With the L.A. theatre scene often feeling so old and stodgy (the median age must be about 65, that being a gentle estimation), the young blood pumps life into the rest of us older folk, always impatiently waiting. As the little ones take their seats, the parents fidget anxiously, as eager as their offspring for the performance to start.

The lights in the auditorium go down, and stage lights replace them. An image of groggy old London materializes: Three children are preparing for bed, a dog is forced to sleep outside, a window opens with the wind, and a sprite-like blond flies through the air, sprinkling fairy dust and grinning ear to ear.

This isn’t any “Peter Pan,” and it certainly is not the animated Disney atrocity; it’s “Cathy Rigby is Peter Pan." For my generation that grew up clapping along with Rigby as we collectively saved Tinker Bell from dying, she is the quintessential embodiment of the iconic character.

Rigby first became Peter in 1974; it was the first acting gig for the once painfully shy Olympian gymnast. She went on to star in commercials and many other theatre productions, only to reprise her role as the “Boy Who Won’t Grow Up” in 1990, which earned her a Tony nomination. She toured in the production again from 1998-99 and in 2004-2005.

Based on a few chapters from J.M. Barrie’s 1902 novel “The Little White Bird,” the musical follows the Darling children (Wendy, John and Michael) as they are whisked out of their nursery beds and flown high over London, second star to the right and straight on ‘til morning. There, they join Peter and the Lost Boys as they befriend Indians, fight pirates led by the nefarious Captain Hook (Brent Barrett) and avoid the mermaids (at all costs).

I first fell in love with Rigby in the early ‘90s when, as a child, I would watch the televised version of her theatrical performance. I had to rig a VHS tape to record the show (this is pre-DVR, remember).

When I sat in my seat on Jan. 15 in 2013, nearly two decades later, hearing the children around me giggle and clap for Tink, I became very nostalgic and uncomfortably emotional. The songs and dances, Rigby’s flips and turns in the air and especially the “Neverland” number with they lyrics and tune flooding back to me – these were blatant and undeniable signifiers of my childhood.

At 60 years young, Rigby performs like she’s still a spring chicken, leaping and flying with such dexterity that you’d think she actually was a 12-year-old boy.

Rigby and the rest of the marvelous cast will be at the Pantages Theatre every day, now through Jan. 27. Bring your kids. If you don’t have any, bring your inner child and join Rigby as she conspires to stay young and vibrant forever.