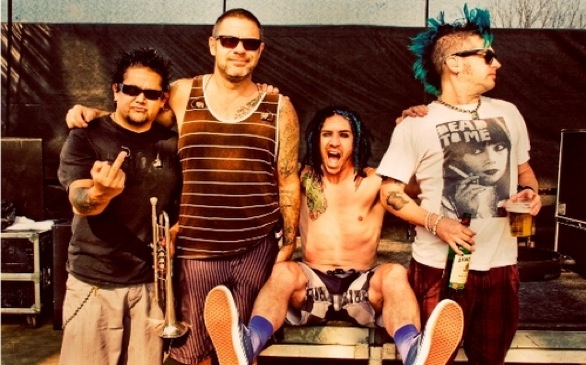 NEW AMERICAN NOISE
Nokia Music and the Sundance Channel have teamed up to produce a series of documentaries that explore the underground music scenes in Los Angeles, New York, New Orleans, Portland, Atlanta and Detroit. Collectively titled New American Noise, the six short films in the series were created by leading independent directors like Abteen Bagheri, Emily Kai Bock, Bob Harlow and Tyrone Lebon and will debut on the Sundance Channel on Jan. 18.

NOFX 30th ANNIVERSARY BOX SET
They relocated to San Francisco quite some time ago, but seminal punk band NOFX originated in Los Angeles. Now NOFX is looking back at 30 years in the business and celebrating with a deluxe vinyl LP box set that contains all 15 of their studio albums, from the 1988 debut release Liberal Animation to last year’s Self Entitled. The Fat Wreck Chords/Epitaph set will be pressed on colored vinyl, will include the previously unavailable 7 Inch of the Month Club disc and comes with a life-size version of the NOFX stage banner. Only 2,500 of the box sets will be manufactured, and 500 of them will be autographed by the band. The NOFX 30th Anniversary Box Set drops on Feb. 19.

WEST OF MEMPHIS: VOICES FOR JUSTICE
The documentary film West of Memphis, which is about the plight of the so-called “West Memphis Three” who were falsely imprisoned for 18 years on murder charges, opened over the holiday break. Now, its musical companion piece is available from Legacy Recordings. Musicians played a big part in helping to raise public awareness of the trio’s situation, and West of Memphis: Voices for Justice features some of the cause’s major supporters like Band of Horses, Eddie Vedder, Citizen Cope and more. Johnny Depp appears on two songs: one with Marilyn Manson on a cover of Carly Simon’s “You’re So Vain” and with Tonto’s Giant Nuts on a cover of Mumford & Sons’ “Little Lion Man.”

REGGAE COMPILATIONS: STRICTLY THE BEST
The VP Music Group released the first title in its Strictly the Best reggae and dancehall compilation series in 1993, and the latest installments, Strictly the Best 46 and 47, have just dropped. The 2-CD set Strictly the Best 46 features a collection of ‘roots’ and ‘lover’s rock’ hits, including “Dancing Beauty” by Beres Hammond, “Lover’s Leap” from Tarrus Riley, as well as cuts by Jah Cure, Gyptian, Freddie McGregor and more. Strictly the Best 47 focuses on dancehall hits like “Summer Wave” from Popcaan, “Stop Sign” by Konshens, “We Love Di Vibes” by I Octane and features songs from Sean Paul and others.

HALF NOTES
Los Angeles rock band dada is celebrating its 20th anniversary and heading out on its first tour since 2004. The tour begins with a show at the Key Club on Jan. 23; expect to hear the group’s best-known song, “Dizz Knee Land.” Opening the show will be 7Horse, a dada spin-off group. A concert to benefit Phil Alvin, front man for legendary Los Angeles punk/roots rock band the Blasters, will be held at the Observatory Theatre in Santa Ana on Jan. 26. Put together to raise funds to help Alvin cover medical bills from a recent serious illness, the show will feature re-united Blasters with all original members and more special guests.