Nacional Records is Shaking Up the Latin Music Mix 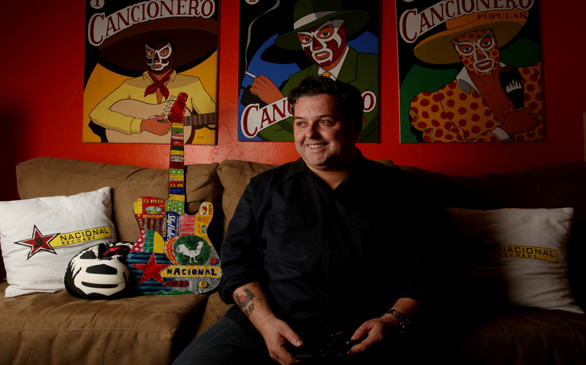 As the hours ticked down to the Latin Grammy Awards in Las Vegas in November, the pheromone level was rising fast at the Eyecandy Lounge.

Mexican pop stars cooed and preened for the cameras. Spanish-language TV reporters burbled into their microphones about which celebs were wearing whose designer labels. A DJ detonated blasts of rock en espanol across the cavernous Mandalay Bay casino.

At a cocktail table a few feet away, Tomas Cookman took in the spectacle with the relaxed air of a man who in eight years has quietly built one of the most taste-shaping brands in contemporary alternative Latin music: North Hollywood-based Nacional Records and its parent company, Cookman International.

Dressed in a sport coat, jeans and pink Chuck Taylor high-tops, Cookman's only concession to VIP fashion statements was the Rolex on his wrist. Several Nacional musicians were up for Latin Grammys the next day, and as he nursed a drink Cookman praised his artists in a hype-free way that's about as rare as humility among entertainment moguls.

But when the conversation turned to the question of whether the Latin Grammys represent the breadth of today's dynamic Latin music scene, Cookman's chill demeanor grew a couple of degrees hotter.

"Absolutely not, because it's still run by a Miami-based TV network," he said, referring to Univision, the powerful Spanish-language broadcaster that hosts the Latin Grammys.

"Their business is not to expand culture and break new artists," he expounded. "Their business is to sell soap or cars or peanut butter. But, you know, there's enough of us that continue fighting the good fight, and each year there's a little bit more space. We'll keep on fighting that fight."

While many of his major-label rivals have chased ephemeral trends (e.g., reggaeton) and hitched their fortunes and reputations to lucrative lowest-common-denominator pop, Cookman has recruited ambitious, complex artists as varied and critically esteemed as the Argentine ska band Los Fabulosos Cadillacs; Colombian trip-hop rockers Aterciopelados; L.A. hometown hip-hop heroes Ozomatli; and Nortec Collective, the bilingual electronica pioneers who are Tijuana's answer to Kraftwerk.

Nacional's artists don't move millions of CDs off record shelves; the label's all-time best-selling disc, La Radiolina, a 2007 release by the French-Spanish punk-reggae rebel Manu Chao, sold about 110,000 copies. It's a respectable number in today's fragmented music market, but a sliver of what Latin superstars such as Juanes, Shakira and Los Tigres del Norte can generate. ("That's fantastic, considering Manu Chao's the type of artist that many of his fan base would just go download it illegally anyway," Cookman said with a laugh.)

Nacional must fight for airwave space as well as shelf space. L.A. listeners are as likely to hear its artists played on public radio's English-language KCRW-FM or KPFK-FM as on commercial Spanish stations like KSSE-FM Superestrella.

Yet Nacional, which operates out of a deceptively anonymous Burbank Boulevard edifice across the street from a storefront church and a head shop, exerts an influence over the industry that goes beyond its niche-market album sales.

"Nacional showcases Latin music that isn't only folkloric, or what most people know as Latin American music," said Ana Tijoux, the politically clued-in Chilean rapper whose breakout record 1977, released stateside by Nacional in 2010, received a Grammy Award nomination for Latin rock/ alternative album. "They bring attention to music ranging from electronica to a mix of everything."

Altogether, Cookman and his staff of 13 preside over a roster of 55 artists who regularly make off with major awards and top critics' best-of-year lists. When Rolling Stone selected its 10 Greatest Latin Rock Albums of All Time last year, three Nacional artists - Manu Chao, Aterciopelados and the Cadillacs - were included.

Besides its record label, Cookman International comprises music-publishing and artist-management units, and runs the 13-year-old annual Latin Alternative Music Conference (LAMC) in New York City, a high-profile showcase that Cookman plans to augment this year with food tastings, film screenings and what he describes as other "cool and left-of-center" Latino cultural happenings.

"Most American labels don't have the understanding of how Hispanic markets work, which Tomas has nailed down for the last 25 years," said Jose Luis Pardo, guitarist-songwriter of the New York-based Venezuelan disco-funk band Los Amigos Invisibles, which switched to Nacional after several years with David Byrne's Luaka Bop imprimatur and a stint with their own indie label. "I don't know that anybody else has the expertise or the network that he has."

Cookman's path to the boss' office hewed more closely to the ripped-jeans, DIY philosophy of Malcolm McLaren and the Sex Pistols than to the Harvard Business School syllabus. Raised by a single mother in Manhattan's Lower East Side projects, he grew up yearning for something better, while being told not to let his dreams get too big. "The best thing about growing up in the projects is it gives you a starting point of where you don't want to be," he said.

He got a gig with a band, playing drums and writing songs, after answering an ad in the Village Voice for a group that was "a combination of T-Rex and Bay City Rollers." His school of rock was clubs like CBGB and the downtown experimental art scene of the late '70s and early '80s.

Then he got restless and moved to Buenos Aires, which was reveling in the holy trinity of sex, drugs and rock 'n' roll following the collapse of the military dictatorship. Cookman spent five years in Argentina, got introduced to Los Fabulosos Cadillacs, started managing them, and realized he'd found his career.

When he returned to the U.S. in 1990, he brought back several Cadillacs albums in a suitcase, along with a richer perspective on what Latin music could be. His first L.A. office was his Hollywood apartment's bedroom. In the old days, he said, his wife used to drive him around in the dead of night, their eldest child asleep in the back seat, so that Cookman could hop out and nail posters to telephone poles.

Although Nacional's revenues have grown annually, the early days were lean. "First year we were like smoke and mirrors. The first years we used to make up fake emails to look like we had more people working for us. I know all the tricks in the book."

Today the company grosses "a seven-figure amount," Cookman said, and has its eye on expansion. He wants to have 70 artists on his roster by 2014 and add more employees while continuing to plow most of its earnings back into the business.

To gain exposure and create buzz for its artists (and other alternative Latin acts), Nacional hosts a music show known as "La Hora Nacional" that airs on MTV's Tr3s network and is reminiscent of "Yo! MTV Raps" and "120 Minutes." Cookman himself hosts a weekend afternoon show on Sirius XM Radio Inc.'s En Vivo satellite channel.

The label also has aggressively pushed its artists' songs for use in commercials (Nacional has licensed 30 tunes to ESPN alone), as well as through a string of new specialty CD releases. Cafe Con Musica, a compilation disc featuring Nacional artists like DJ Bitman, the Pinker Tones and Mexican Institute of Sound, debuted last summer at the top of Billboard's Latin pop and world-music charts, and has been awarded the ultimate mainstream consumer honorific: placement at Starbucks counters.

His next move, Cookman said, is to find some investors to help his company raise its game to a new level.

"I read all these books, whether it's David Geffen's or Richard Branson's or all these wonderful people who are crazy in their own way who had a dream, and they got their dream," he said. "I think I've shown with all my different divisions I can make money. There's so much more potential."