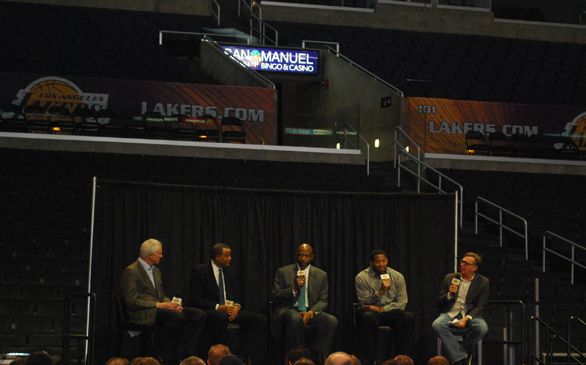 Los Angeles Lakers fans had the night off from thinking about their 17-22 season and took in a night with the stars. Staples Center opened its doors to dedicated Laker fans for the 9th Annual Lakers All-Access event Wednesday night.

For three hours, fans got an exclusive behind-the-scenes look at their beloved "Lake Show" and the people who contribute to it. Laker fans of all ages were able to tour the Lakers locker room, shoot around on the Lakers court and take photos with the Laker Girls and championship trophies.

Throughout the night, a silent auction was held where fans were given a chance to buy Laker memorabilia. The auction featured everything from a basketball signed by Kobe Bryant to a jersey signed by Dwight Howard. Fans were also able to enjoy a buffet dinner while listening to two star-studded panels narrated by Time Warner Sports Play-By-Play announcer, Bill MacDonald.

The first panel featured Laker greats such as James Worthy, Jamaal Wilkes, Robert Horry and Lakers general manager, Mitch Kupchak. The panel discussed the Lakers’ future and talked about the powerhouse team’s early struggles. Despite the slow start, Kupchak and Wilkes were adamant about being patient.

"If they get rolling and they make the playoffs, I wouldn't want to play the Lakers," said Wilkes.

The Lakers have struggled with multiple injuries this season. Most recently, forward Pau Gasol missed five games due to a concussion. Still, all were optimistic about the Lakers hitting their stride and reaching the postseason.

"When everyone comes back [healthy], there's not a team that would want to see the Los Angeles Lakers," said Worthy.

Half an hour later, head coach Mike D’Antoni, Steve Blake and Antawn Jamison – who took the stage for the second panel of the night – greeted fans.

Blake spoke about his injury and was optimistic about getting back to the court and possibly playing through it. Blake had surgery on Dec. 5t after suffering an abdominal tear in November 2012. He practiced with the Lakers earlier that morning and described it as a break through.

As one of the newest Lakers, Jamison spoke about his choice to become a part of this historic organization.

"I looked at the Lakers with envy," said Jamison. "And now being a part of that is special, and I [feel] I deserve the opportunity to be a part of a franchise like the Los Angeles Lakers."

The pressure put on the players this season is one thing, but none can compare to the pressure put on D'Antoni. He took the time to address the fans to let them know he understands their frustration this season and asked them to be patient. He went on to describe his new found love for L.A fans.

"The fans are better here than in New York," D'Antoni said with a laugh. "[In N.Y.,] they're with you until about the third quarter, then they're against you. Our fans are with us until the end."

As the Lakers continue to fight their way to the top, the team knows that it's going to be a battle until the very end.

"We hit rock bottom, and [the players] understand we're going to play through some rough patches," said D'Antoni. "[But in this system,] defensively we have found things that work."

Once playoff time comes, the season is in the past. Whether or not the Lakers make a statement at the playoffs, it's clear from the event’s turn out that their fans will continue to bleed purple and gold.