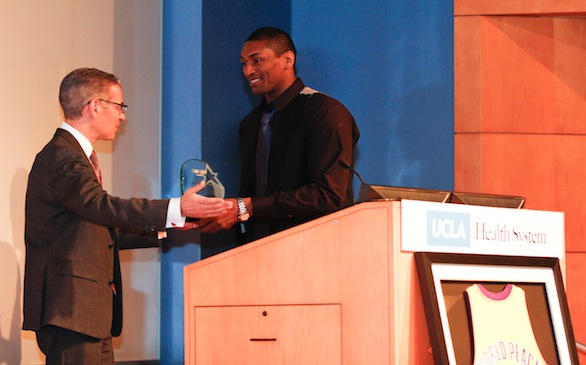 Westwood, Calif. --- Metta World Peace was honored Friday evening at the UCLA Medical Center for his efforts in raising awareness for mental health charities. World Peace is the first non-UCLA employee to ever win the CI Care award.

In his podium speech, after accepting his award, World Peace stated his necessity of needing help by others to improve himself as person.

“I wanted to [help others] through YouTube, but I had to win a championship to get the word out, and now I’m winning great awards,” he said about wanting helping young kids with similar metal health issues.

After winning his first NBA championship in 2010 with the Los Angeles Lakers, World Peace openly thanked his psychologist during his post celebration interview for helping him maintain a relaxed attitude and controlled emotional demeanor.

Since then, World Peace has had several setbacks that have caused him to regain a momentarily negative connotation toward his persona. We all have a clear memory of World Peace punching a Detroit Piston fan in the face during the Indiana Pacers-Detroit Pistons brawl in 2004 when he received an 86-game suspension. But the most recent setback was his seven-game suspension after a hostile elbow to former Oklahoma City Thunder guard, James Harden, causing him to have a concussion.

In the summer of 2012, World Peace was live on air with 710 ESPN Los Angles where he was asked about punching the Detroit Piston’s fan for throwing a drink at him in the Indiana Pacers-Detroit Pistons brawl. World Peace has said that since the incident, he has come a long way as a person and has even befriended the victim. Until this day they maintain a very close friendship.

World Peace was also asked about the elbow thrown on Harden to which he made clear that we was looking forward to putting the incident behind him.

“At times I do feel a little bit like I’m disappointing people that really put their all into it…the person that I was is definitely not the person I thought I would be when I was 13 years old…I always thought I would be a clean cut guy, but it did not work out like that," said World Peace.

World Peace, formerly known as Ron Artest, changed his name in 2011. He said that changing his name was meant to inspire and bring youth together all around the world. Since then, he still has faced harsh criticism for his aggressive demeanor and outspoken behavior.

“…The world, or whoever watches basketball has seen Ron Artest at his worse, and they saw me at my best. I didn’t want people to see me at my worse. But it’s okay; we move on. I’m continuing to better myself, and I really want to say thank you for this award…we are going to continue to try and help heal wounds,” World Peace said as he concluded his podium speech.

World Peave became involved with Mental Health in Schools Act, which would help raise more than $2 million in grant funding for 200 schools. He has also been part of several public announcements on behalf of the Los Angeles County department of Mental Health, and due to his efforts, he has also won the 2010-2011 J. Walter Kennedy Citizen Award.