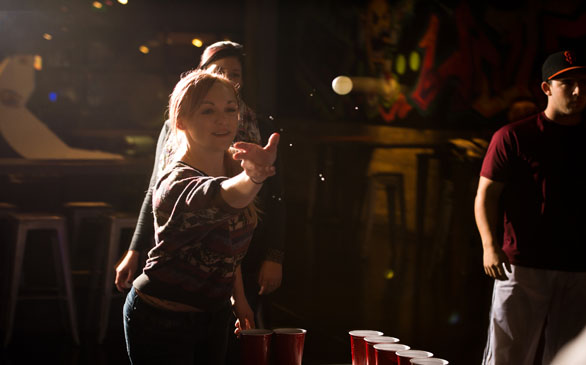 The Beer Pong King, with a microphone peeking from his front pocket, ascends to his throne - otherwise known as the DJ booth at the Union in Roseville, Calif. Below he sees four long tables stacked with red plastic party cups, a crowd of 20 thirsty teams vying for a $100 purse, and wayward pingpong balls popping around the floor like bacon splatter.

"Welcome to Tuesday night beer pong at the Union," said his royal highness, his microphone now live. "If you're here for beer pong, come see me at the DJ booth. And we've got $5 pitchers all night. Anyone looking for a partner?"

How cool it would be to sign bar tabs simply as "Beer Pong King"? But for that he uses his real name: Hector Rivera. He's 30 years old, living fit and single not far from the Union, a popular hangout for those recently of drinking age in Roseville.

Rivera looks a little like the comedian Pablo Francisco, but beer pong is no laughing matter for the young entrepreneur. It's the gas in his Acura TL, the roof over his Roseville home, the Burberry watch on his wrist.

Beer pong, after all, has emerged from its party game origins with plastic cups to high-stakes $50,000 tournaments, official merchandise and music videos. Rivera's mission: to get some of that money.

The Beer Pong King isn't so much a feared competitor as a CEO type with PowerPoint presentations about this party game's commercial potential. He aims to build a beer pong empire, to transform this time-honored party game into a lifestyle and a profitable bit of pop culture.

This might sound like crazy talk, but Rivera is banking on a beer pong bonanza, either through a "Pong Kings" reality TV show, his documentary, mass merchandising beer pong equipment - or, preferably, all of the above.

"You've seen the pictures of Justin Bieber playing beer pong, right? said Rivera, who often speaks with an unmodulated confidence, like life is one giant pitch meeting. "Beer pong is ready to explode. I'm trying to find someone who does it better than me. I'm not only keeping up but I'm setting the trends."

The life of beer pong royalty sounds charmed, like a forever fraternity party or someone who plays co-ed softball for a living. The perks have been plenty: hanging with hip-hop stars and a Playboy Playmate; rubbing elbows at the beer pong table with Sacramento Kings players and actor Tommy Davidson; no early-morning alarm signaling it's time to rush to the cubicle.

Before Rivera crowned himself the Beer Pong King, hip-hop was his hustle. Rivera, a graduate of Roseville High School, started promoting concerts at age 19, working with the rap stars Too $hort and E-40. He also held a couple of average-Joe side jobs, including managing a company that provides maintenance services for apartment buildings.

But, as it did for many of us, the year 2008 fizzled like the last bit of foam in a keg. Rivera was laid off from two jobs when the Great Recession hit and meanwhile felt burned out from promoting rap shows.

He remembered the days of hanging with friends in Tempe, Ariz., home of Arizona State University, and seeing how much the college kids loved playing beer pong. Rivera listened to his intuitions as a promoter, noting how unorganized the typical college beer pong tournament was run. He would do better.

A Beer Pong King was born.

"I'd seen Donald Trump say that during the worst economic times is when there's the most opportunity," said Rivera, on a recent afternoon in midtown, far from the glow of beer signs and video game screens. "I thought with my skills at promoting - I'm blessed with a mouthpiece - I can get 100 teams and they're paying $40. That's four grand! If I give them a grand, I still have three grand."

Beer pong itself has been a party staple for decades, and is thought to have originated at East Coast universities. Whatever its genesis, beer pong has become synonymous with house parties, college ragers and wherever young people congregate with small oceans of beer.

Beer pong is generally played with two teams facing each other on either side of a table. They take turns lobbing a pingpong ball into the other team's cups, which hold a few ounces of beer. If the ball lands in its sudsy target, that team must drink the beer from the cup and the empties are removed. Once a team has consumed all the beer from its cups, game over.

Tournaments can now be found around the country. Rivera organizes at least two tournaments a week, primarily in Roseville, including the Union and the Trocadero. Teams pay a $5 entry fee and compete for a prize purse, usually $100 or more.

Other beer pong tournaments crop up at the occasional local bar, but Rivera prides himself on taking his promotions to another level.

"I'm using much more than social media," he said. "I'm making videos, making fliers, doing print media, going on the news. The other (promoters) are eating off my fat."

Here's the twist: Like many beer pong tournaments held at bars, the cups at the Union actually hold water, which no one drinks. The game is treated more like darts, though there's no shortage of pint glasses in hand and pitchers of beer ordered from the bar. Beer pong in this case is more skill and gamesmanship, not just an excuse to get hammered.

Rivera isn't much of a drinker, anyway. ("My whole deal is I'm really focused," he said. "I'm really athletic, so I don't like to drink.") Even if a game used beer, he points out, it takes about three bottles of beer to fill 10 cups _ or about a beer and a half per person on a two-person team.

"When we pitch the networks, I'm going to set up the tables, right in front of executives," Rivera said. "We don't even need to use beer. We're going to show them how long it takes a beer pong game to go on with two to three beers and four people, which is what we're drinking anyway at parties. It's not a binge drinking game. It's not quarters."

Rivera gets paid by the bar for his promotional efforts and services, like a DJ. He brings the official tables used by the World Series of Beer Pong - narrower than a standard pingpong table - and the balls. If someone wants to use beer, they have to buy it from the bar.

"I'm comfortable," he said. "I don't make a ton of money right now. But I've been very blessed for the last four years. This is all I've been doing. I've worked hard to get to this point."

Here at the Union, many have benefited from beer pong. Co-owner Wes Metcalf said Rivera's beer pong tournaments generate about 75 percent of the bar's business after 10 p.m.

That's much-needed money for a wintry Tuesday night that might otherwise be slow. "He brings in a good crowd," Metcalf said. "Those people will be here until last call."

And look here, it's members of the local hip-hop group WhoRide. After teaming up with Rivera, the crew released the anthemic track "Balls Back (Beer Pong Song)." The song features an appearance by Smoove Da General of Cali Swag District, the Southern California rappers who launched a dance craze with "Teach Me How to Dougie."

Getting that cameo was one of Rivera's coups. Dipping back to his concert-promoting days, he booked two Cali Swag District shows in exchange for a video appearance on "Balls Back," a song he also executive-produced.

"The 'Dougie' song was huge, especially with young people, and I was fortunate to have a relationship with them," Rivera said. "And that was the whole point: to get them on ('Beer Pong') and promote my business. I only paid $500 for Smoove to be on the track. It was a steal."

"Beer Pong" meanwhile resulted in a promotion deal with Vevo, the online music video company brought to you by Sony Music, Universal Music and other major labels. Nobody got a check for $60,000, but Vevo supplied $60,000 in online promotions for the song.

The video went live in July and "we're almost up to 100,000 views," said Mike Carlson of WhoRide, with pint glass in hand. "That's hella good. We wanted to be ahead of the game with beer pong and hit right before it all blows up. We're taking an idea and running with it."

But if you want to talk big beer pong money, that would be Byron Findley. He's an especially feared competitor this night at the Union, where he poses for pictures with an oversize check for $50,000. That was his grand prize at the recent World Series of Beer Pong in Las Vegas, a triumph with his teammate, Michael Seivert. The two compete under the name Drinkin' Smokin' Straight West Coastin,' and Rivera has co-sponsored them at previous Beer Pong World Series stints.

Findley, 28, lives in Sacramento and works as a project engineer for a construction firm when he's not lobbing pingpong balls for cash prizes. He's eying an upcoming tournament in Las Vegas with a minimum $100,000 purse. His total winnings over the years with Drinkin' Smokin' Straight West Coastin' hover around $150,000.

"Ninety-five percent of the game is all in your head," said Findley, offering a bit of beer pong wisdom.

Rivera's pitching a show, to be set in San Diego, that mixes "Jersey Shore"-like shenanigans with beer pong culture. Hearing that Season 4 of "Jersey Shore" in Italy sold for $7 million pumps up the Beer Pong King. He's hoping to reap the kind of paychecks usually reserved for dotcom moguls or Hollywood executives.

He has a Hollywood connection in his court for pitching the reality series: Alex Cortez, a veteran radio programmer who's also worked in promotions for Warner Bros. They're hoping to hear back soon from 25/7 Productions, the company behind "The Biggest Loser."

Rivera's also working on his "Beer Pong King" documentary, which goes behind the scenes at his tournaments and features him hanging with the likes of Heather Rene Smith, Playboy magazine's Miss February 2007. Filming the documentary is still under way but a "Beer Pong King" trailer is up on YouTube.

"I feel this is one of the most interesting documentaries in the world because it's about what's really going on with the young people today," he said. "Not only have I made a career from it, but I've got my region's musicians, athletes and actors to be a part of this. No one in the beer pong community has come close to that."

Rivera wants to continue expanding the beer pong audience from its preppy and collegiate origins, making it both more celebrity-driven and streetwise. Though the World Series of Beer Pong has its own official merchandise, Rivera wants to get in the licensing game, too. He has an end game in mind: Wal-Mart.

"They're the only company capable of doing the volume I want to do," Rivera said. "I'd like a $49.99 Beer Pong King table that's affordable for every college kid in the country, plus cups, balls, T-shirts, all that stuff, and have them license it. They're gonna go like hotcakes."

The Beer Pong King hopes that future hurries up. While wine improves with time, the same can't be said of beer.