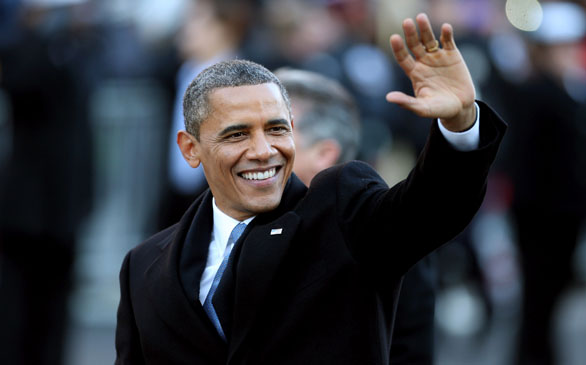 Allowing that "our journey is not complete," President Barack Obama offered a robust liberal vision of America in his second inaugural address, embracing gay rights and a substantive role for government even as he acknowledged the challenges of a bitterly divided nation.

An ocean of American flags waved under overcast skies and hundreds of thousands of faces tilted up just before noon EST Monday as Obama stood on the Capitol's West Front and repeated the oath of office in America's 57th presidential inauguration.

Chants of "O-ba-ma" rose, echoing from a packed National Mall. The atmosphere was festive, but the fevered excitement that welcomed America's first African-American president four years ago had been toned down. Still, though the crowd appeared smaller, it may rank as one of the largest for an inaugural celebration.

In an 18-minute speech, Obama paid tribute to the vast cultural, demographic and political changes that twice helped sweep him into office.

He also highlighted themes of national unity, borrowing language that even the most ardent tea party follower would endorse - praising "the patriots of 1776," describing freedom as "a gift from God," endorsing healthy skepticism of "central authority," and describing as "fiction" the notion that government can solve all ills.

But Obama made clear he views government as essential to fix the nation's problems and to guarantee the security of its citizens, reaffirming Democratic ideology stretching from the days of Franklin D. Roosevelt's New Deal.

"Medicare and Medicaid and Social Security, these things do not sap our initiative," he said. "They do not make us a nation of takers. They free us to take the risks that make this country great."

The remarks were an allusion to one of the fiercest arguments of the presidential campaign - when Republican nominee Mitt Romney described 47 percent of Americans, Obama supporters, as overly reliant on government - as well as to attacks on entitlement programs during recent budget battles in Congress.

He became the first president to use an inaugural address to call for an end to discrimination against gays and lesbians, equating it with landmark movements for women's suffrage and African-American civil rights.

"Our journey is not complete until our gay brothers and sisters are treated like anyone else under the law," Obama said as the crowd applauded.

Obama, who long said he was evolving on same-sex marriage, waited until his re-election campaign was in full swing last year before he announced his support.

Speaking on Martin Luther King Jr. Day, a federal holiday, Obama alluded to the slain civil rights leader after putting his hand on two Bibles - one owned by King, and the other used at the 1861 inauguration of Abraham Lincoln.

Obama first took the oath of office from Chief Justice John G. Roberts Jr. at the White House on Sunday, when his term officially began. On Monday, Roberts administered the oath again, and the two men spoke slowly and carefully - unlike four years ago, when they mangled the text and had to arrange a private do-over at the White House.

Former Presidents Bill Clinton and Jimmy Carter, both Democrats, and their spouses were among the dignitaries who bundled up in heavy coats on a wintry gray morning to witness the public oath. The other living former presidents, Republicans George H.W. Bush, who was recently released from two months in the hospital, and his son, George W. Bush, were absent. Both issued warm statements of congratulations to the Obamas.

In his address, Obama offered an ideological primer on Democrats' beliefs, rather than specifics of the fights likely to dominate the upcoming session of Congress.

He cited "Newtown" for example, referring to the horrific elementary school shooting in Connecticut last month, but did not explicitly mention gun violence or firearms control.

He declared that the nation cannot succeed "when a shrinking few do very well and a growing many barely make it," the kind of language that sparked Republican complaints during the presidential race that he was engaging in class warfare. But he did not say how he would rectify the disparity.

And while he stressed the need to rise above "party or faction," he aimed a series of barely concealed zingers at his opponents, including climate-science deniers. He said failure to respond to that threat "would betray our children and future generations," but offered no clues of what he might do.

"We cannot mistake absolutism for principle," he said in another pointed passage, "or treat name-calling as reasoned debate."

Some Republicans said they searched in vain for olive branches. Sen. John McCain, R-Ariz., who lost to Obama in 2008, said the president did not reach out to "those on the other side of the aisle in a plea to work together."

"That's his privilege, but I note that was not in the speech," McCain told reporters.

Sen. Jeff Sessions, R-Ala., said Obama's speech was "not too political" under the circumstances.

"I would just say that at this point in history it's fair for us to ask, 'Can't we make the government leaner, more productive and less costly, and allow the vitality of American to flourish in the private sector?'" he asked.

There was no official estimate of the size of the throngs who gathered in celebration. In 2009, as many as 1.8 million people attended Obama's first inauguration, a record. Monday's crowd did not extend to some areas that were occupied last time. Ridership on Washington's transit system was down by more than one-third from four years ago, according to the transit agency.

Also missing at the sequel were some of the lofty ambitions of his first inaugural address, reflecting, in part, first-term setbacks at home and overseas.

When Obama first assumed office, he reached out to America's enemies and spoke of a "new way forward" to the Muslim world. His second inaugural address was much more inward looking, and offered little more than a fleeting reference to "engagement" with overseas foes and alliances with friends.

According to White House aides, Obama wanted to emphasize equality and opportunity in his second inaugural address. "It was deeply emotional and personal," said one aide.

Obama decided in December to use his inaugural address and upcoming State of the Union speech as a package - a "one-two punch" in the words of one adviser.

Monday's address was meant to highlight second-term priorities and frame the argument he will take to the public when he appears before a joint session of Congress on Feb. 12, Lincoln's birthday. At that point the administration will unveil more details.

"He wants to leave office with the economy restored in such a way that the middle class really can be thriving," said a senior adviser, who requested anonymity to talk about internal planning. "The other issues are all part of how you get there. Immigration is part of it. Investment in education. Every piece is about how we can be pushing the arc of progress a little farther along."

Those on the Mall clearly approved of Obama's speech. They cheered his promise to respond to the threat of climate change, to expand equality for women and gays, and to make it easier for voters to cast ballots without waiting hours in line.

Throughout the day, campaign supporters received emails from Obama, inviting them to join a tax-exempt advocacy group that his political network has formed to push his agenda. The president's advisers hope the group can help sway support in Congress for Obama's policies - many of which face opposition in the Republican-led House and uncertain fate in the Democratic Senate.

"America's possibilities are limitless, for we possess all the qualities that this world without boundaries demands: youth and drive; diversity and openness; an endless capacity for risk and a gift for reinvention," Obama said. "My fellow Americans, we are made for this moment, and we will seize it - so long as we seize it together."

(Staff writers Kathleen Hennessey, Lisa Mascaro and Michael A. Memoli of the Washington bureau contributed to this article.)