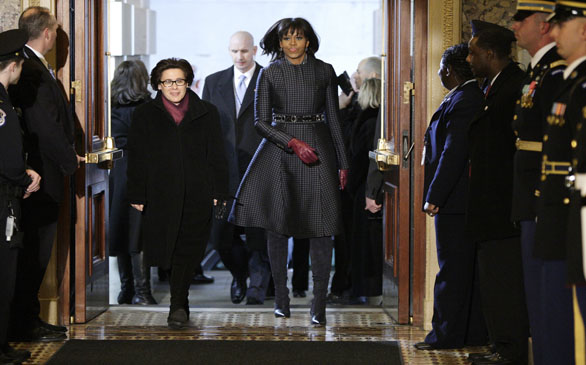 The First Lady's ensemble was constructed from a silk modeled on the lines of a silk tie. Browne, based in New York, is a noted menswear designer who also designs women's clothing. He was named the Council of Fashion Designers of America Menswear Designer of the Year in March 2006 and the GQ Designer of the Year in November 2008.

President Barack Obama and his family arrive at St. John's Episcopal Church for a church service before his inaugural ceremony in Washington. From left: Marian Robinson, first lady Michelle Obama with daughters Malia and Sasha.

As she customarily does, the first lady mixed couture with ready-to-wear by adding a cool studded J Crew belt around the waist of the sheath dress, then later sported it over the matching princess-cut topper. Her shoes were also from J Crew.

Later she changed into boots for the parade and added a pair of plum-colored leather gloves that mimicked the color combinations worn by her daughters.

The first lady, long known for her singular modern and American style, caused a sensation last week when she debuted a new haircut with bangs. Called "the fringe," or "the Karlie" after supermodel Karlie Kloss, the cut has been dissected by fashion and style experts and lauded for it's youthful, fresh look.