“The Deep Throat Sex Scandal”: From Silver Screen to the Stage 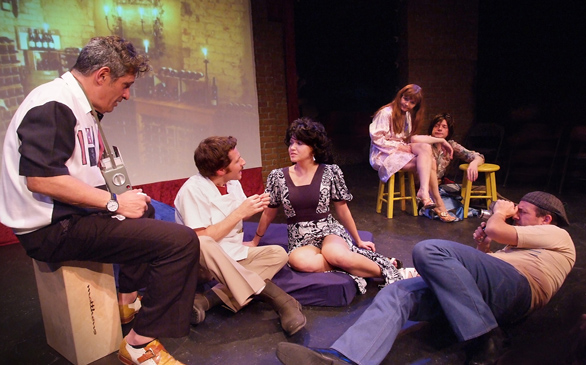 The cast of "The Deep Throat Sex Scandal" in a scene where they're filming Deep Throat.
(Credit: Ed Krieger)

Natasha Charles Parker patiently waits for my and David Bertolino’s arrival in the Zephyr Theatre’s lobby on Melrose Avenue in Los Angeles.

After I introduce myself to Charles Parker, Bertolino arrives within seconds. He and I sit down beside Charles Parker, and we begin to talk about his much-awaited play, “The Deep Throat Sex Scandal,” which runs through March 3rd at the Zephyr. Both appeared to be beyond excited in forming part of this piece as it premiers to the L.A. audience.

Charles Parker, who portrays Linda Lovelace, shows her excitement. “It’s going above and beyond most of the theatre you see in Los Angeles,” she says. “It’s risqué…I feel, as an actor, that you take many more risks in this than in any other play – at least that was the case for me, which is great. It’s what artists love.”

“I’m thrilled,” says Bertolino, who wrote the play. “It’s wearing a couple of hats; I'm also the producer. It’s over the top, and it’s something that happened to me by happenstance.”

The enthusiastic Boston-native considers himself a very hands-on producer. More often than not, he’ll find himself in the lobby asking people what they thought of the show.

Essentially, “The Deep Throat Sex Scandal” showcases the 1970s adult film Deep Throat and the ensuing controversy the film ignited. Deep Throat grossed more than $600 million. One would think that this entity could be better suited for a larger stage, but Bertolino believes otherwise.

“I looked at 11 theatres and decided this is where we wanted to be,” he says with a firm look upon his face. “This is a great theatre – very eclectic and different. And it’s at a good location. The owner’s a great believer in freedom of speech. And also we’re just very happy to be part of the landscape.”

Guest performers are scheduled to appear. For the Jan. 24-27 shows, Amber Lynn and Bill Margold have been penned in while Sally Kirkland and Bruce Vilanch are set for Jan. 31-Feb. 3. During its third week (Feb. 7-10), the play has scheduled Nina Hartley and Christopher Knight. Additionally, the play’s having Georgina Spelvin and Ron Jeremy from Feb. 14-17.

“The Deep Throat Sex Scandal” also carries Jerry Douglas as its director. Douglas, to no surprise, is an award-winning adult film writer-director.

“No offense to theatre here in Los Angeles, but it’s been taking it in the chin,” says Bertolino. “We’re losing the young audience. Our show is a special event. People will be excited about our celebrity guests on the cast rotation and also of the subject matter of the show. We believe it will be well-received here.”

In some way, shape or form, Bertolino is looking to revitalize the desirability of theatrics on stage, and Charles Parker agrees with him.

“L.A. is the entertainment capital of the world and as David said previously, the theatre scene here in L.A. does leave a lot to be desired,” she says. “I believe the adult film industry is very big here as well. That being said, we feel this play will be taken very well here. Also, this play will attract a large young audience…”

Charles Parker, who can be seen in the flicks Carver and The Ascension, loves the concept of challenging herself in all her acting roles. This is the case when preparing to depict herself as Lovelace.

“It’s been very challenging and difficult, especially since we’re talking about an actual living person. This is really awesome,” says Charles Parker, who’s also an entrepreneur – she owns ShopNYC Tours and NYC Kids Tours. “It involves a lot of reading and watching the film version, of course. Also, talking to people who actually knew the person. That’s the most important thing. It really gives you a great insight as to how the person really was.”

Interestingly enough, Hart’s been helpful to Charles Parker in understanding the adult film industry. “She introduced me to that whole world,” says Charles Parker.

This is Charles Parker’s second encounter with “The Deep Throat Sex Scandal.” In 2010, when the play debuted in New York, she auditioned. She became one of three finalists to play Lovelace, but production went another route. Soon after that occurred, Charles Parker found her way to Hollywood.

She moved here to continue her career as an actress and then noticed the play was in the stages of being brought to L.A.

“She contacted me and told me she had auditioned in New York,” said Bertolino. “She told me she had moved here, and I told her to contact our casting director. She went to the top of the list and, obviously, she nailed it.”

And there she was – more prepared than ever before.

“It was very exciting because I got to pick up the pieces from the research I did, and I continued to tackle this,” she said. “And this time around, I felt very comfortable with the process because I knew David and some of the other guys from the auditions in New York.”

Due to scheduled rehearsals, a joyfully luminous Charles Parker – who classified the play with words such as “titillating,” “hilarious” and “sexy” – soon exits the lobby and makes her way to the stage. Bertolino and I continue to chat a little more.

Before we end our conversation, he makes one thing clear: “We want people to truly understand that this is a true story. We want them to be blown away, no pun intended.”