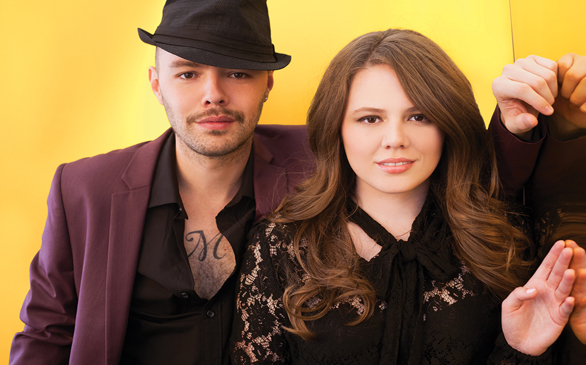 At an early age, both Jesse Eduardo and Tirzah Joy Huerta (musically known as Jesse & Joy) found a passion for music. It’s a distinctive passion, which could be attributed to the likes of their parents.

“We knew at an early age that we were both very passionate for music,” said Joy in a phone interview directly from Mexico. “Our parents would always have music in the house. They played two different kinds of music; our mother is American, and our father is Mexican. We always really loved it. It made music be a big part of our lives.”

Growing up, Jesse & Joy utilized a dose of imagination. They would pretend to play guitar with tennis racquets, Joy said. But things changed as they grew older and more mature.

“When we started writing music, that was when we really understood we were interested in music,” said Joy, who mentioned The Carpenters and James Taylor as musical influences from their mother’s side.

Jesse & Joy are a brother and sister Mexican pop-rock duo that hit the industry in 2005 with their breakthrough release of Esta Es Mi Vida (This is My Life). Since then, the music act has provided two additional studio albums with Electricidad (Electricity) and most recently, ¿Con Quién Se Queda El Perro? (Who Stays With the Dog?).

The relatively young performers (Jesse is 31, and Joy is 26) captured success in 2012, winning four Latin GRAMMY awards: Record of the Year for ¿Con Quién Se Queda El Perro?, Song of the Year for “Corre!” (Run), Best Contemporary Album by Duo or Group and Best Short Video for “Me Voy” (I’m Leaving). They also attained a Latin GRAMMY in 2007 for Best New Artist.

While she endorses awards, Joy pointed out that they prefer to feel the fans’ warmth when the duo is on tour performing.

“Every type of award is welcomed. For us, it's more important to have successful tours and feel the love of the people when we perform,” she said. “We're also very grateful because these types of awards also mean other people in the industry are recognizing our work, and it's a great feeling.”

But the recognition keeps coming not only within the Latin spectrum, but the American market as well. Jesse & Joy carry a nomination for the 55th Annual GRAMMY Awards in the category of Best Pop Latin Album for ¿Con Quién Se Queda El Perro?, which has flourished in sales since its release.

Jesse said he’s happy with what the duo is currently experiencing.

“Everything that has happened in our career is something very special for us,” he said. “The Latin GRAMMY's was something amazing, something we never dreamed of, even thought about. Then, we come out of that dream, not being really out of it yet, when we heard about our nomination to the American GRAMMY; it’s pretty crazy. Our mom is American so she would be really happy if we win. And for us, it already feels like we won the award.”

Without a doubt, Jesse & Joy have gained success, much of which could be rooted to their originality of writing lyrics to their songs and creating music.

Jesse co-writes tracks, but he also loves producing them. “Part of my job in Jesse & Joy is the musical part,” he said. “Even though we both write the songs, my thing is to create the music, give sense to it and build the sound as well the whole production around it.”

About songwriting, Joy added, “Everything we write is personal.” This certainly seems to be the case with their song, “Corre!”

“‘Corre!’ is a story that came to life,” said Joy. “It's about love that you know won't last and the feeling of when you realize that the other person is, in a way, running away from you. The message is about telling that person to go ahead and run, to keep doing it as much as you want because I'm not sticking around.”

One has to ask how Jesse & Joy could even start to plan to better themselves at what they do. While that’s a question surrounding the duo’s prolific originality, Jesse manages to answer it with no hesitation at all.

“I think a key of continuing is to try to improve ourselves, not only as human beings but as musicians and songwriters,” he said. “To push ourselves harder and to the edge every time. We also like to stay away from our comfort zone; that sometimes makes you do things you didn't know you were capable of.”

Jesse & Joy are popular: they’re singer-songwriters who have achieved musical excellence. Nevertheless, both make time to produce philanthropic work. Over the years, they’ve always wanted to perform something aside music while using a “media focus for social and environmental causes,” according to Jesse.

“In the past, we have worked with Amnesty International as well as NRDC (La Onda Verde) and now we will be the new ambassadors for Yoko Ono's Non Violence Foundation, focusing on the issues that affect our home country, Mexico, by bringing awareness and promoting peace,” added Jesse.

Not bad for a pair of siblings whom began playing instruments, writing songs, and listening to music at their “parents’ living room just as a game,” confessed Jesse.

What’s next on Jesse & Joy’s agenda? The duo is expected to embark on a tour through Latin America, Spain and the U.S., including a stop in Los Angeles.

“We spend most of our time between touring and shows in L.A.,” said Joy. “It's a city we love. It's very magical to us – almost like a second home.”