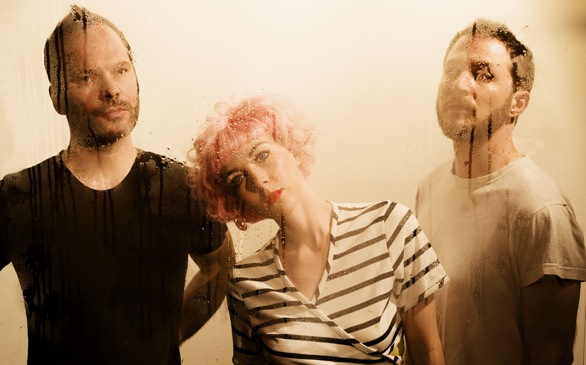 All the way from the U.K. and produced by Radiohead’s Nigel Godrich, Ultraísta brings a new sound to the plate: afrobeats with an electronic twist. Lead singer Laura Bettinson gave Campus Circle the inside scoop on her and the band.

Campus Circle: Can you tell me about when you started playing music as a trio with Nigel and Joey?
Laura Bettinson: Basically Joey and Nigel go quite a long way back. They met when they were working on Beck’s Mutations album, so they have been friends for a very long time. Then they decided to start writing music together…I got involved with the guys about three years ago or so, when I was introduced through a mutual friend when Nigel came to one of my gigs. From there, he thought what I was doing would fit along with what they were doing, and we’d make afrobeats/electronic-type stuff.

CC: Why did you guys decide to base your name (Ultraísta) off the literary movement of the 20th century in Spain?
LB: At the time, we were just coming towards the end of finishing the music, and Nigel was reading a book by Louis Borges, a book of his short stories that he picked up from a market somewhere. He basically read more about the author and found out that he was part of the Ultraísta movement. We liked the way the word looked on the page, and it kind of referred to a lot of color and energy and cutting something up and starting again. It is quite abstract and surreal, so it did go well with what we were.

CC: Most of your videos have these crazy light mirages. What will be your next video, and do you plan on keeping that same psychedelic and futuristic style?
LB: I don’t know…we keep thinking, “Oh, we should put another something out.” We made [a lot of the videos] about a week apart. Every four days, we made about seven videos…we did a big run of just making lots and lots of content. We do have videos for three quarters of the album, but as to what is coming next, I am not entirely sure.

CC: Who writes the songs and where does most of the inspiration come?
LB: We write them all collaboratively a lot of the time, but some songs we work on separately. Some songs Nigel brings the lyrics to, and others I just work on separately and send the guys the cut line, and we start from that. But a lot of the time we work on them together, and then we work on it more separately and then [bring them] back together again to kind of finish and polish them off. [The album] was really a blurred person…everything was kind of built up and torn back to the very beginning and then built up again in a different direction. It is kind of hard to remember what came first a lot of the time.

CC: What is a typical day like for you?
LB: [Nigel and I] have been doing a lot of studio stuff again this last week or so. So, typical day: I get up fairly early (but not to early), and I just do some Internet trolling for a few hours through the morning (but probably longer than I should), and then I make music. Some days I have some meetings with people, and then I am looking up photos and looking up different band shoots; I do a lot of that.  I like to be surrounded by a lot of creative people that always need a hand and help with something.  A lot of the time, I am doing that. Or I’m just in the studio, just with Nigel, and we will probably be doing more of that until the guys go on tour or get more involved in their projects. Every day is completely different, and I do not really have a schedule.

CC: Who is your dream band to tour with?
LB: We have had a brilliant Four Tet remix of “Small Talk,” and we have also had an amazing remix by Matthew Dear, who is going to produce. If we combine a tour with us, Four Tet and Matthew all on the same tour, that would be my dream come true because that would be a really, really good night out.

Ultraísta will perform at the Masonic Lounge at the Hollywood Forever Cemetery on Jan. 31.