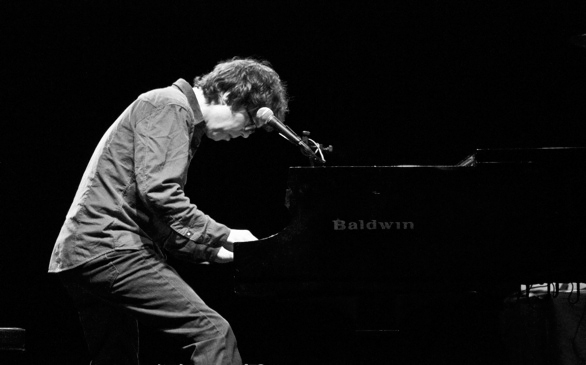 The Wiltern was filled with people waiting for Ben Folds Five’s first L.A. show in more than a decade. It was the perfect venue for the set, and the music took over beautifully. It had been 13 years since the band had come together. The last time they played L.A., no one was tweeting about it, Facebook didn’t exist, and none of the audience members were trying to capture a photo on their phones. I am sure that their previous show was very different - or at least the audience was. With that being said, it was a fantastic night and, clearly, most of the audience agreed.

An audience in their late 20s early 30s waited patiently prior to the show. It was easy to assume that most people there had grown up with Ben Folds Five CDs in their collection, and this was a bit of a much-needed flashback for them all. The band came to the stage in darkness and began its set without any introduction.

As the band started to play, the crowd (which contained many pairs) swayed to the music, and in stereotypical L.A. concertgoer fashion, tried not to show their excitement. However, they were not always successful in stifling their screams, and finally, everyone broke loose with the beginning of “Landed.” When the first notes of the song filled the venue, the entire crowd erupted with giddy joy, and almost everyone in the nearly packed house sung the song.

Two songs into the set, Ben Folds turned to the audience and with a truly happy smile, he thanked the fans for the support and for coming out for their long awaited show. The band had been gearing up for this tour for quite some time, starting last year with television appearances. They are now making their way up the coast and will be continuing on to Japan in the coming weeks. Rave reviews and packed house have greeted the tour, which is support of their newest release, The Sound of the Life of The Mind.

The band parted ways in the early 2000s, and Folds explored other musical avenues on his own. While it was a successful venture, it’s safe to say everyone at the show was welcoming Ben Folds Five back with open arms.

If you grew up loving the band, you will have a fantastic flashback night with new music thrown in. And if you are just now getting into their sound, the live show is the only way to truly experience it.