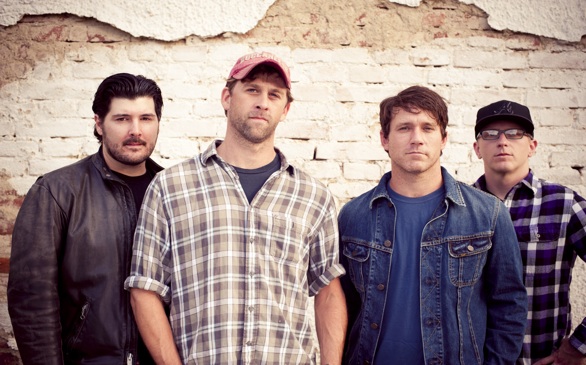 The four-member punk band has been togter for 20 years.
(Credit: Marco Krenn)

One can count on one hand the number of punk bands that have stuck around for 20 years. Hailing from the small town of Gainesville, Fla., Hot Water Music has somehow, against all odds, become one of these bands. Exister, its first full length in more than eight years, was released last May, and the group is currently trucking along on its first full tour in years.

With a dual vocal style that combines the best of melodic hardcore, rock and catchy, complex guitar work, Hot Water Music has developed a massive following over the years. Eight full lengths, countless world tours and numerous bumps along the road have done little to deter the band that is still made up of the same four dudes.

The band’s longevity is no complex, brain-busting equation, according to singer/guitarist Chris Wollard. “We just really love doing what we do,” he said. “Anytime we had to put out an album or go on tour and meet people, we felt lucky. We never really took that s*** for granted.  When you love what you do, you fight hard to be able to keep doing it.”

But while many bands deconstruct over the years, replacing members and splintering, Hot Water Music has never been about this.

“We made a promise to ourselves back then that it was going to be the four of us, and that’s all it’ll ever be,” said Wollard. “If anyone’s had enough then we’ll all just move on. When we made that promise, we really meant it, and we knew we had a different thing going on. And beyond even meeting that promise…we knew there was a certain chemistry going on that even if we wanted to, we wouldn’t be able to replicate it.”

Spending two decades together with anyone will change the dynamic in the room, and it’s no different with these four gentlemen.

“You get to a different level of communication where you can almost read each others’ minds,” said Wollard. “We just know each other so well that…When it’s the four of us, it's kind of its own thing.”

“At a certain point you, you’ve got to go, ‘Hey man, am I going to try and go back and recapture what it was like when I was 20 years old? Or am I going try and write an album about where I’m at right now?’” said Wollard. “We just had to tune everybody out and just stay true to who we are and who we are at this point. Who we are as 37/38/39-year old guys...life is different. You think about different things, you worry about different things. To me, I was just trying to make a snapshot of who we are today. Let’s be true to ourselves the same way as when we started this band. Who cares what anybody thinks? Who cares what anybody expects? It’s just us, and that’s all that matters.”

With no sign of slowing down, the veteran ensemble remains a compelling anomaly in the world of punk.

The band will be playing a sold-out show at the Echo on Feb. 2, and Exister is available on iTunes and stores everywhere.