"Backbeat": It Ain't the Jersey Boys! 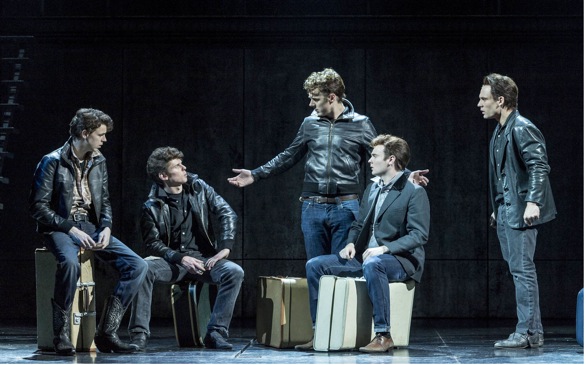 "Backbeat" is the story of the Fab Five before they were the Fab Four.
(Credit: Craig Schwartz)

Scottish actor/singer-songwriter Daniel Healy’s dad played in a Beatles cover band, so when Healy was cast as Paul McCartney in the original live stage version of “Backbeat,” which premiered in Glasgow in 2010, he said, "It was like playing a hero."

The musical “Backbeat,” which is now playing at the Ahmanson Theatre, adds a chapter to the universal story of the Beatles that everyone thinks they know. It’s an untold part about the biggest band in the world before anyone knew who they were and, more importantly, before they knew who they were, according to Healy.

“Backbeat” is the story of the original members of the band (then known as the Quarrymen) during a particular time period. The time and place is the early 1960s in Hamburg, Germany, where the young teenagers (John Lennon, Paul McCartney, George Harrison, Stuart Sutcliffe and Pete Best) travelled from industrial Liverpool, U.K. to the hedonistic Hamburg. They walked into a place that was filled with sex, brothels and drugs. It was crazy times playing rock ‘n’ roll covers, according to Healy.

“It's about the raw band before they were polished, packaged and approved for sale. It ain't ‘Jersey Boys,’" he said. Because of its content (there are prostitutes, sex and a lot of cursing and smoking), “Backbeat” is an “adult-themed” show and rated PG-13.

Furthermore, the musical is built around the lesser-known but compelling story of bass player Sutcliffe, who falls in love with a German photographer, Astrid Kirchherr, while in Hamburg. He has to decide whether or not to stay with her and continue painting or go back to England with his best friend Lennon and play in the band. This triangular relationship was an intricate part of the story and ultimately shaped the Beatles into the group the world fell in love with.

"It's about the moments that are ‘ifs’—if Stuart had stayed, if John didn't listen to Paul…here were so many points that were circumstantial in that time that it was like a perfect storm," said Healy.
With all the drama and storytelling, the show still plays more as a live gig than a musical, with no backing tracks and a cast that has worked together for so long that they live and perform as almost any rock band on tour.

"It's chaos!” said Healy. “I've been in bands my own life, [and] I do feel like we are like a band. We've grown as a band together. We've done what the Beatles did: eight shows a week, for three years…"

The current show keeps the raw chaotic edge of the original Scottish production, but after having had a long run in the West End in London beginning in 2011, it is now a very different show. Healy explained that Tony Award nominee stage director David Leveaux directed the touring shows based on Iain Softley and Stephen Jeffreys’ adaption for the stage, which was based on Softley, Michael Thomas and Stephen Ward’s film. Healy said Leveaux is the best director he has ever worked with.

“It's like watching one of the greats,” he said. “He's great with the cast. There's a new script set and simplified sets, but [there’s] much deeper storytelling; it's acting on a different level.”

The musical is sure to be a great time for older and younger generations alike, and for those who consider themselves Beatles’ fans, “Backbeat” is not a show you’ll want to miss.

“Backbeat” is playing at the Ahmanson Theatre from Jan. 30 to March 1.