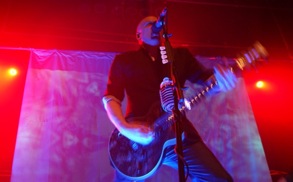 The Devin Townsend Project rocked the house over at the Fonda this past weekend while supporting metal rockers Gojira.

The energy was definitely building as Townsend took the stage to perform a good selection of his music, including last year’s release of Epicloud, for the huge crowd that filled the house at this sold-out, fantastic show. The rocker handled the crowd with charisma and fun showmanship. During songs such as “Planet of the Apes” and “Lucky Animals,” attendees were in full riot mode and even did jazz hands for the chorus the” Lucky Animals “(at the line: “Animals, animals, and they’re lucky”). It was hilarious to see these metal heads not caring and going for a popular Broadway show tune move. And if they half-assed it, Townsend would heckle the crowd until they let loose and went for it. Townsend even played some of his other songs from other projects like “Truth” and “War,” which the crowd rocked out along to.

While the show was entertaining and the crowd seemed be having the time of its life, it was a short set with only about eight songs that got the house pumped for Gojira. After Townsend finished the set, he sang the praises of the closing band, assuring the audience that they were in for fantastic show by the headliners.