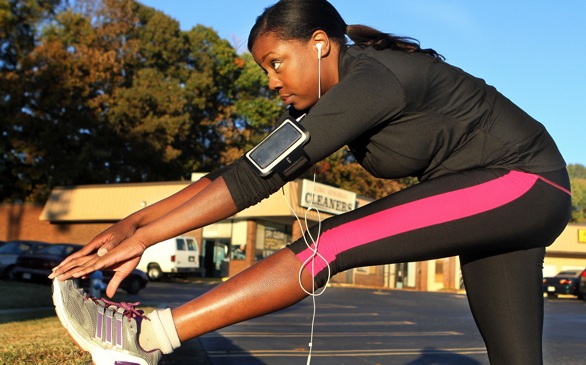 Get up and exercise. You’ll be surprised at the benefits you’ll achieve.
(Credit: Phil Skinner/Atlanta Journal – Constitution/MCT)

Lift weights, do aerobic activities, go the gym, blah, blah, blah. We’ve heard it all from our parents, doctors, health teachers, coaches, etc. Yes, we know that it’s important for young people to exercise now in order to avoid health complications later on in life: high cholesterol, diabetes, brittle bones – exercise can help us avoid all of that.

However, what some might not know is that exercising produces hidden benefits that are especially appealing to college students.

Campus Circle spoke with Dr. Eudene Harry, author of Live Younger in 8 Simple Steps, who provided five surprising exercising benefits for college students. According to her, you should exercise more, so you’ll…

1. Feel Less Anxious About an Upcoming Test
That anxiety you feel prior to a test or speech can be unbearable. To help decrease your anxiety levels, Dr. Harry suggests that you work out. Psychology Today published an article in 2011 that stated 30-40 minutes of exercising a day three times a week offered patients with panic disorder the same benefits as some anti-anxiety treatment drugs. Although more research is needed to further understand how and why exercise helps anxiety, it doesn’t hurt to try and see if it works for you.

2. Study Better for Your Final
According to Dr. Harry, exercise has been linked to improve memory and increase test scores. She stated that the neurochemistry in the brain produces a compound that helps you achieve this benefit. Published earlier in 2012 in Neuroscience, a study suggested that “exercise enhanced object recognition and produced a beneficial decrease” in anxiety (this ties back to benefit No. 1).” In other words, it increases your ability to remember. Again, more research is needed.

3. Replenish the Brain Cells You Killed after Drinking Last Weekend
It’s been argued for years whether or not alcohol does indeed kill off entire brain cells. According to a recent Rutgers University study done with rodents, it’s been shown that drinking moderately can actually decrease the number of new brain cells. However, exercise might be able to undo that damage. “Exercise seems to actually give the brain the ability to make new brain cells…” said Dr. Harry. According to the New York Times, “scientists found that exercise jump-starts neurogenesis,” which is the creation of new brain cells. By no means does this mean students should drink as much as they exercise; it just means that perhaps exercise can be good for all parts of your body, including your brain.

4. Avoid Catching Illnesses from Your Classmates
Sniffling, sneezing and coughing students are not uncommon on most college campuses. Living with a roommate in a small confined space, eating at dining halls where hundreds of students pass through daily, sitting shoulder-to-shoulder in a packed football stadium – there’s ample of opportunity for you to catch your classmates’ contagious illnesses. Plus, it's flu season! However, working out may be your best defense mechanism. “Exercise has been linked to improve immunity,” said Dr. Harry. “You don’t want to be sick all of the time during college…Exercise will decrease your risk up to 67 percent, depending on the individual.” This is because working out will increase the rate at which antibodies flow through the blood stream, and the high temperature you reach through exercise makes it hard for some infectious organism to survive in the body.

5. Get Rid of Those Pesky Pimples and Zits on Your Face
Once we grow out of our awkward pre-teen/teen years, aren’t we also supposed to grow out of acne? Sadly, apparently not. Even as we enter the beginning of our low-20s, we still have to battle unruly pimples, zits and blackheads. However, exercising could be your secret weapon. When you work out, you’re causing circulation within in your skin. “When you improve circulation to the skin, you’re carrying nutrients to the skin,” said Dr. Harry. According to her, exercising will deliver nutrients as well as remove waste and impurities, largely thanks to sweat. The results: a nice rosy glow and clear, blemish-free skin. If only we realized this before senior portraits were taken…

After reading all of these benefits, you’re probably itching to go to the gym. However, Dr. Harry said it’s also important that you don’t overdo it or else you won’t experience all of these hidden benefits. For example, going too hard will actually increase your stress hormones (bye-bye benefit No. 1), which will make you more vulnerable to illnesses (bye-bye benefit No. 4). Her advice: adopt a moderate workout plan.

Special Features
6 ways to cut back at work and be instantly happier
4,322 views

Special Features
Ticket costs for theme parks climb more than for other forms of entertainment
2,402 views

Special Features
Ringling Bros. and Barnum & Bailey to Debut Out Of This World Circus Experience
6,189 views