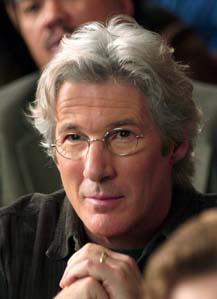 Untitled Document Richard Gere doesn’t get the credit he deserves as an actor, perhaps because of the way he looks: like somebody plucked him off the set of a Head & Shoulders commercial. He’s excessively handsome, and that can handicap a serious actor; audiences never stop thinking of you as the vain young scoundrel in American Gigolo, and they resist.

Age has improved Gere, however. In one way, at least, he is now physically imperfect, and therefore more real and credible. His range will never be the best – when does he not seem wearily self-amused? – but he has excellent taste, and conviction when he needs it.

In Bee Season – a richly tended tale of transcendence from directors Scott McGehee and David Siegel (Suture) – Gere gives arguably the most complete performance of his career. Saul Naumann (Gere) is a cultured and dynamic religious history professor who reigns over his household like a Jewish Santini. He cooks, he plays violin, he zips around San Francisco in his antique Alfa Romeo like some miracle specimen of bourgeois-intellectual breeding.

Screenwriter Naomi Foner Gyllenhaal (Running on Empty) – adapting from Myra Goldberg’s novel – immerses the drama in an invigorating ether of spiritual imagery and ideas. In his classroom, Saul lectures on the Jewish parable of creation, of a God who had so much love to give, it literally exploded in his hands, creating existence and all the lost, scattered souls in it. Unconsciously or not, Saul the super-dad is mimicking the parable at home.

Wife Miriam (Juliette Binoche from Chocolat) – left with no real role in the family – feels shrunken and useless, and is quietly losing her sanity. (Siegel and McGehee, masters of visual metaphor, wed her shattered psyche to Saul’s idea of human "shards" striving to reconnect with God.)

Saul lavishes attention on teenage son Aaron (Max Minghella), but when sixth-grade daughter Eliza (Flora Cross, in an enchanting debut) wins the district spelling bee, the father flips allegiances, infuriating the son and sending him into the embrace of a fresh-faced Hare Krishna missionary (Kate Bosworth from Blue Crush).

To prepare for the national bee, Saul guides Eliza through a series of semantic exercises, ultimately exposing her to Kabbalah and its mystical reverence for the power of words. Kooky digressions follow, but Saul – a fundamentally faithless man who gets a taste of his own dogma – provides a firm anchor to an astonishing story of family and connection, and Gere weighs him beautifully.