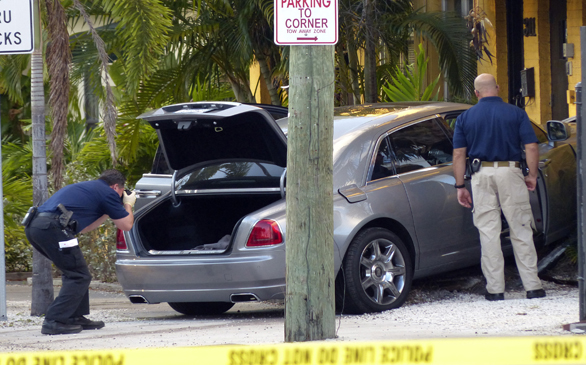 A Rolls-Royce driven by rapper Rick Ross crashed into a building in Fort Lauderdale early Monday after being shot at more than 10 times from what neighbors said was a high-powered rifle.

With bullets whizzing by, Ross tried to drive away and lost control of the car, according to Fort Lauderdale police. Riding along with him: his passenger, Shateria L. Moragne-el, 28, of Davie, Fla.

Ross, who also lives in Davie, had been celebrating his 37th birthday at the nearby Floridian diner. One of the bullets meant for the car pierced the front window of the iconic restaurant and reportedly landed in a cooler.

No one was hurt in the shooting and the crash, said Fort Lauderdale police spokeswoman DeAnna Garcia. The suspects escaped before police arrived, she said.

Hours after the shooting, bullet shells remained scattered along the 1500 block of Las Olas Boulevard near the diner.

The morning breakfast crowd at the Floridian ate their eggs near a shot-up window at the restaurant.

Carol Touchstone and George Maznicki, who own a boutique on Las Olas called Bohemian Style and live two blocks away, said they heard a barrage of booms around 5 a.m. Monday.

"I was sound asleep and I heard boom-boom-boom and I ran out said, 'Did you hear that?"' Touchstone said.

Maznicki replied: "That was gunfire."

Maznicki, 55, said about 10 shots came rapid-fire from what sounded like a high-powered rifle. Maznicki and Touchstone hunt and do target-practice, and say they are familiar with guns.

Touchstone, 61, said there have been a lot of robberies, strong-arm robberies and graffiti -tagging recently in the neighborhood.

The shot-up window of the Floridian diner was cordoned off by chairs and is taped up from the outside to prevent the glass from shattering. A nail salon called Tiffany also got hit through the front window.

Around the corner, the Rolls-Royce had swerved off the road and went through a landscaped patch in front of a small apartment building. Two or three little palm trees were run over and some of the landscaping was uprooted.

Ross is best known for his hit single ``Push It'' and his founding of Maybach Music Group in 2006. Most recently, his ``100 Black Coffins'' was featured in Quentin Tarantino movie ``Django Unchained.''

Last February, a house the rapper owns in Miami Gardens was the scene of a crime. A resident, Gregory Paul Nesbitt, was shot to death in the front yard.

Ross had spent his birthday Sunday celebrating on South Beach, where he and his girlfriend partied with P Diddy and Ross performed his newest single "Box Chevy" at Club LIV.

Ross, whose real name is William L. Roberts II, named himself after former drug trafficker "Freeway Ricky Ross," who has sued the rapper over use of his name.

"I don't wish this upon no man. Reality is when u claim 2 live that life & ppl know that you are faking. They are going 2 test u. reality."