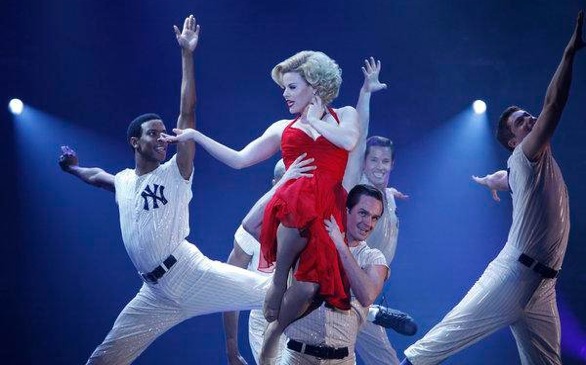 “SMASH” DROPS BOMBSHELL
Fans of NBC’s hit television show “Smash” have a couple of things to get excited about; the show’s second season kicks off on Feb. 5, and the soundtrack for Bombshell, the show’s musical-within-a-musical, drops on Feb. 12. Bombshell is inspired by the life of Marilyn Monroe, and the show's two big stars (Katharine McPhee and Megan Hilty) primarily perform the musical’s songs. Also singing on the soundtrack are Will Chase, Debra Messing, Nick Jonas, Uma Thurman and Bernadette Peters.

MUSINK 2013 LINEUP
Bad Religion, Pennywise and Reverend Horton Heat will headline this year’s Musink Festival, a tattoo and music festival being held at the OC Fair & Events Center in Costa Mesa March 8 – 10. Other musical acts appearing will be Guttermouth, the Vandals, Lagwagon, TSOL, Lucero, the HeadCat and Jonny Two Bags. Among the 300-or-so tattoo artists making an appearance will be Jack Rudy, Robert Atkinson, Small Paul and Tomas Garcia. Tickets are on sale now. www.musink.org

2013 GRAMMY NOMINEES ALBUM
You’re probably quite familiar with most of the music that’s up for a GRAMMY Award this year, but now you can find much of it all in one place: on the just-released compilation 2013 GRAMMY Nominees. The Black Keys and fun. lead the pack with five nominations each and are represented here by the cuts “Lonely Boy” and “We are Young” (with Janelle Monae). The set also includes contributions from Katy Perry, Gotye, Kelly Clarkson, Taylor Swift, Florence + the Machine, Muse, Pink, Adele, Hunter Hayes, the Lumineers, Maroon 5 with Wiz Khalifa, Alabama Shakes, Miguel and others. The GRAMMY Awards show will broadcast live on CBS Feb. 10.

L.A. BANDS: NEW RELEASES, SHOWS & NEWS
BIG HARP – Just released is the duo’s latest full-length, Chain Letters. Catch them live at the Bootleg Bar on Feb. 6.
THE BRONX – Punk rockers release The Bronx (IV) on Feb. 5. They’ll be touring the U.K. for all of February and after that playing Stateside as alter ego band, Mariachi El Bronx.
BUCKCHERRY – Multi-platinum rockers drop Confessions on Feb. 19 and tour with Kid Rock into April.
DEAD MEADOW – Resurfacing after a long ‘inner trip,’ these psych rockers have just released single “Mr. Chesty” as a prelude to their forthcoming double album, Warble Womb.
HARRIET – The quartet has announced an upcoming residency at the Echo; they’ll perform there every Monday in March.
INCAN ABRAHAM – Psychedelic band has a new limited edition E.P. called Springhouse out on white vinyl; catch them at the Satellite on Feb. 9.
SCOTT JAMES – The 17-year-old singer/songwriter from Thousand Oaks has a new six song E.P. out this week called Destinesia.
MATT POND – Pond has an acoustic E.P. The Natural Lines out now that you can download for free at NoiseTrade; his new full length The Lives Inside the Lines in Your Hand drops Feb. 5.
JEREMY SAFFER – This acclaimed rock photographer is holding a music photography seminar at SoundCheck Hollywood Feb. 9-10. Attendees must purchase tickets in advance, but a book signing open to the public will occur Feb. 9 at 6 p.m.
YARD OF BLONDES – These folk rockers have announced a March 26 release date for their E.P. Murderology, and you can get a preview when they play Skinny’s Lounge in North Hollywood on Feb. 15.