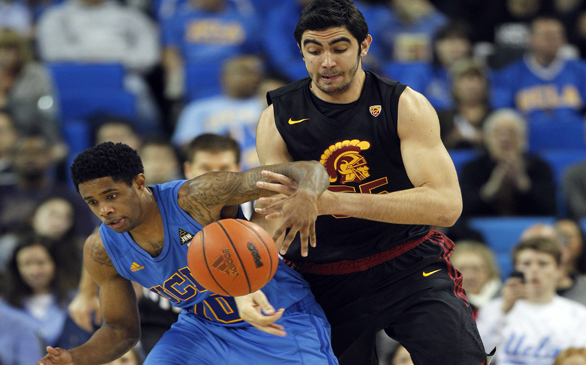 WESTWOOD, Calif.--- Despite a late push, the UCLA Bruins couldn’t overcome the solid play from the visiting USC Trojans, who earned a 75-71 victory at Pauley Pavilion in Westwood Wednesday night.

The Bruins had a very slow start and struggled to keep their composure, trailing USC 38-30 at the end of the first half.

UCLA star freshman, Shabazz Muhammad, was suffering flu-like symptoms during the game. He seemed to struggle from the field, but he finished the half with only five points. However, he came alive in the second half, draining a critical three-point jumper that cut down the lead to four.

But USC continued to capitalize on their lead. The Trojans kept their composure and produced well both offensively and defensively.

In overtime, Muhammad hit a jumper with two minutes left, which gave the Bruins a 71-70 lead, but it wasn’t enough for the Bruins.

Muhammad registered 22 points, six boards and two steals. This is the ninth time he’s scored 20 or more points this season. He also leads the Bruins in scoring.

Travis Wear finished with 16 points and five rebounds. When asked about Muhammad’s flu interfering with his performance, Wear said, “I didn’t notice it at all. Shabazz is a competitor. He’s not going to let anything keep him from competing.”

Head coach Ben Howland also commented on Muhammad’s illness: “I’m proud of Shabbaz for battling for us. He’s been deathly sick all week. It hurt to lose to a rival, especially at home. With two straight losses, we have some soul-searching to do, especially with our tough stretch down the line.”

Coming off a disappointing loss to Arizona State, UCLA (16-6, 6-3 Pac-12) tried to make a statement to USC that this game was much more than a rivalry.

“I’m obviously very disappointed with the loss. ‘SC played tough, inspired basketball…They were more physical than us in the first half,” said Howland.

The Bruins struggled from the perimeter, whereas the Trojans were able to finish with 42 points in the paint.

Although the Bruins were trying to keep themselves in the game by attempting defensive stops in the second half, their effort didn’t fully develop.

Larry Drew II contributed eight points, eight dimes, and three rebounds, but stated that “stops and rebounds” were the biggest issue for the Bruins.

“I didn’t expect to go out there and lose, “ he said. “I knew we needed to win this game.”

USC’s Aaron Fuller showed high intensity, which led the rest of his teammates to contribute to execute plays well toward the end of the first half through overtime. He had 15 points and crashed the boards for six rebounds.

With this rivalry game over, Drew II is already thinking about their cross-town meeting against the Trojans on Feb. 24 at the Galen Center.