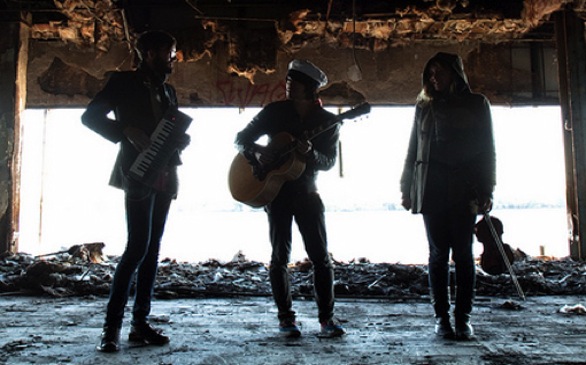 La Big Vic is a trio to keep your eye on.
(Credit: underwaterpeoples.com)

Cold War is the second release from this most interesting of trios: La Big Vic. The group consists of Japanese multi-instrumentalist Toshio Masuda, keys player Peter Pearson and singer/violinist Emilie Friedlander. Masuda and Pearson have their best moments on songs like the instrumental “Nuclear Bomb,” a fast-paced EDM number where synths sizzle like a lit fuse and popping beats tick off the seconds till detonation. Instead of ending with a boom, though, “Nuclear Bomb” finishes with a violin flourish from Friedlander, and her vocal work highlights much of the rest of the album. On “All That Heaven Allows,” Friedlander’s vocals and a downbeat melody make the song reminiscent of something that Santigold might do, while the airy pop arrangement of “Emilie Says” is not unlike that of many Christine McVie-sung Fleetwood Mac songs. Borrowing a bit from the Human League, the “Don’t You Want Me Baby”-ish “Caveman” is perhaps Cold War’s best shot at radio airplay and dance floor action.