Bonjour From David Beckham As He Signs for Paris St Germain 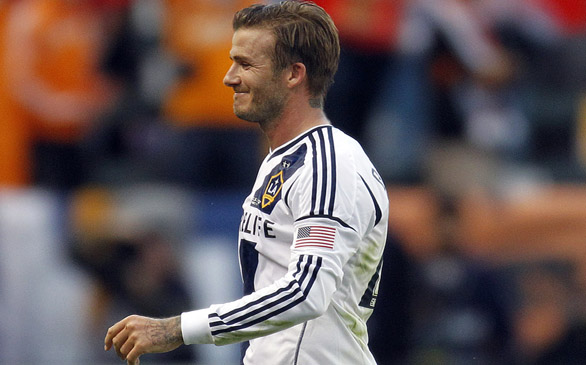 Former England captain David Beckham signed for big-spending French side Paris St Germain on Thursday in a deal until the end of the season sealed on the last day of the winter transfer window.

Beckham was unveiled as a PSG player at a news conference with club president Nasser Al-Khelaifi and sports director Leonardo.

Beckham has been without a club since completing a five-year contract at Major League Soccer club Los Angeles Galaxy and was lately keeping fit at England's Arsenal.

"I am very lucky. I'm 37 years old and I got a lot of offers, more offers now than I have had in my career," said Beckham who revealed he would give his salary to a children's charity in Paris.

"One of the reasons I wanted to come to Paris was we decided on something quite unique. I won't receive any salary. My salary will go to a local children's charity. That's one of the things we're excited and proud to do. It's something exciting and I'm not sure it's been done before."

Beckham said he chose PSG "because I can see what the club is trying to do and what players are coming in . . . PSG is a club that is going to have a lot of success over the next 10 or 20 years."

Beckham, who collected a record 115 caps for England, won the 1999 Champions League with Manchester United.

He left Old Trafford for Real Madrid in 2003, before moving to LA Galaxy in January 2007, during which time he spent time on loan to AC Milan in 2009 and 2010. He left LA Galaxy in early December after winning the MLS Cup for the second time.

Beckham will be hoping to win a league title in a fourth country with PSG, but said French was not his strong point. Asked by a journalist to speak one word in French, he replied, "Bonjour."

"I've not spoken French for quite a few years, since I was at school. I'm definitely going to have to brush up on it," he said.

"I'm excited to be here. It's something we've been talking about for quite a while. My wife and children will stay in London because the children go to school there. But we're all very excited."

Beckham also relished the prospect of working with PSG's Italian coach Carlos Ancelotti, with whom he played under at AC Milan in 2009.

"I can run around," he said. "I've not lost any of my pace because, to be honest, I've not had a lot of pace during my career. For me, Carlo (Ancelotti) is one of the best managers I have played for. It's exciting on a number of levels."

Although his contract is only for five months until the end of the season, Beckham said he wanted to help the club develop.

PSG, who are under Qatari ownership, have been spending big over the past years, signing the likes of Zlatan Ibrahimov, Thiago Silva and Javier Pastore. They are joint Ligue 1 leaders with Olympique Lyon and reportedly already after Beckham last year.

Club president al-Khelaifi said the club wanted to become one of the biggest in Europe and described Beckham as one of the most professional players in the game both on and off the pitch.

"David received a lot of offers from clubs around the world and that makes it very special for us," he said.