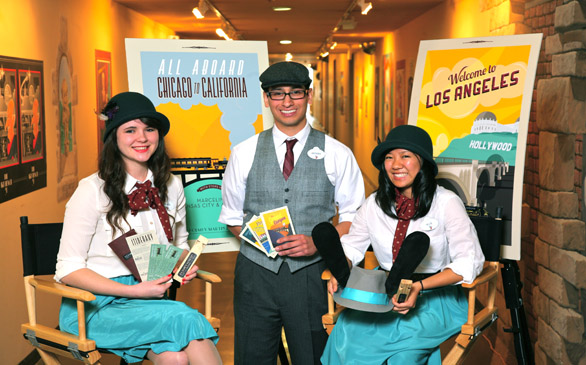 The beauty of design continues to grow, and that’s certainly the case with Disney Imagineering ImagiNations design competition finals this year.

ImagiNations, created and sponsored by Walt Disney Imagineering (the creative arm of all Disney Parks and Resorts worldwide, according to a prepared statement), carried local talent this time around: students from Pasadena’s Art Center College of Design and California State University Long Beach made the finals.

The team of design students from the Art Center College of Design is composed of Jennifer Cho, Sunmin Inn, Angela Li, and Sophie McNally. Their feature work is titled “Disney’s Ukaipo Resort at Auckland, New Zealand.”

Li believes that the chemistry within the team enabled everyone to be very productive.

“I think one of the things that really worked for us was the teamwork,” said Li during a phone interview. “We all were very close friends, so every time we worked together it was a fun working environment. It didn’t really feel like we were working. We all knew each other, and had an even distribution of skills. Concept-wise, we always got everyone’s approval before we used anything. Everyone was always on the same page. Also, there was never anyone left behind. Everyone was very excited for the project.”

Cal State Long Beach’s team is made up of Amanda Madden, Anthony Martinez and Allie Wong. Their piece is “Disney’s Holmby Martin Railway.”

“We began with a few brainstorming sessions,” said Madden regarding the initial stages of deciding what to work on for their project. “Ally first mentioned she loved Thunder Mountain. Then, I mentioned trains and we all love trains, and we went from there.”

Since Jan. 28, the teams have presented their projects to Imagineering executives, while meeting and networking with others. They also go behind the scenes of Disney and some might even interview for paid internships.

“It’s just been a dream come true since coming here especially since I’ve been wanting to do this since 2007. To finally be able to do this is great,” said Martinez. “Also, I was very excited to meet all the other contestants because they are all very talented. You can’t get this far without talent. We came in as strangers but have had the opportunity to get to know each other and bond, and we actually like each other. We’ve met a lot of people from the program who actually got started like us – through the program. It’s great to see that this program actually does help, in networking and meeting people.”

For Wong, being a finalist is already a victory in itself.

“We always thought about how cool it would be to make it here,” she said. “But now that we are here, and after everyone we’ve met and everything we’ve seen, it’s amazing. Disney has recognized something that we did. So yes, it’s a victory. I never thought they would be so excited to have us. It’s very confidence-boosting.”

McNally points out that the Art Center College of Design started with nothing in terms of the project, so they’re grateful their finished work received this honor.

“This project started from scratch, and we didn’t know where it was going,” she said. “…To see it come this far is very gratifying for us.”

Interestingly enough, a rather unique opportunity developed for Jane Liu. She’s a student at Art Center College of Design, but found her way to “Legenda Emas at Jakarta, Indonesia” along with Carnegie Mellon’s Laura Laham, Andre Sutanto and Anisha Vyas.

They had never met face-to-face, as their work entailed virtual sessions from coast-to-coast: e-mails, phone calls and Skype meet-ups, among other things alike.

“We didn’t expect to make it this far, so just getting here is a blessing to come here and see everything,” said Liu. “We’ve all become very good friends.”