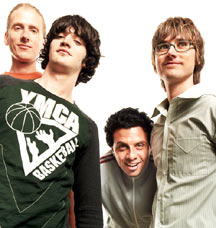 "We’re Canadian and Canadian’s drink, right? It’s what we’ve been brought up on," says Matt Hughes, singer, rhythm guitarist and one-quarter of Canada’s Next Big Thing, Flashlight Brown. Fueled by beer, boredom, teen angst and young love, Hughes, along with Fil Bucchino (bass/vocals), Tim Thomson (drums) and Mikey Conroy (lead guitar), have come a long way since their days as a small-town ska-punk band during the mid-‘90’s.

"Three of us are from a town called Guelph in Ontario, we went to school there," says Hughes. "We were all in different bands and then two of us, me an Fil, ended up living together and we just started jamming. Then we just started making up tunes and playing shows and it just kind of happened like that."

At first, as with all struggling bands, they had trouble getting shows, but with a little ingenuity, they found the quick way to get their amps in the door. "When you’re in this band nobody knows, nobody wants to book you," Hughes points out. "So Fil used to do all the booking and it sounded a lot better to make up some booking agent’s name than to call the clubs saying, you know, ‘this is Fil from the band.’ Funny enough, it actually worked and we managed to string tours together here and there. As well as giving birth to ‘The Harry Wells Booking Agency.’"

But that was a long time ago. Countless shows and a million miles later, the band (somewhere in Middle America, halfway through a U.S tour, living on gas station food and leftover gas station food) got a surprise call from legendary producer Rob Cavallo (Green Day, Jawbreaker, the Muffs, Goo Goo Dolls). "We all worshipped Rob for years. It was a huge score. We literally went from sleeping in parking lots on tour to being in L.A. recording this record within a week. The whole experience was pretty mind blowing."

What was originally scheduled to be a two-song demo turned into their major label debut, My Degeneration, released April 8th. Filled to the brim with pop-heavy punk rock tunes that satisfy through and through, Flashlight Brown are as excited about their upcoming release as their fans should be. "It’s the first time we’ve ever got the chance to record a really great-sounding album," says Hughes. "We had all the resources at our fingertips. Even now, when we listen to the record, it’s really cool hearing your band sound like that. We love it."

To support the album, Flashlight Brown took to the tried and true, lovely and terrifying, concert circuit known as The High School Lunch Circuit. "It’s really cool because you play for 20 minutes to a bunch of kids who are really receptive, it’s perfect age and everything, and then you’ve got the rest of the night off. It’s amazing. The other day, we were playing this one school, and by the end of the show, half the school was up on stage with us. A nice sunny day and all hell broke loose. It was great."

My Degeneration also signals a shift in the band’s lyrical sensibility since ‘97’s Flashlight and ‘99’s Running Season. "I used to write a lot songs based on real stuff," Hughes notes, "but that kind of gets boring after a while because I think reality isn’t as good as fiction, and it’s not as challenging, either. Now I’m trying to write stuff that’s not true, like stories. I always like songs that are good stories. That’s my goal."

"Really sarcastic," he adds, "but with a friendly feeling."

From the straight ahead rock of "Ready to Roll," to the more melodic "Patricia," My Degeneration pulls the plastic off of a stronger and matured Flashlight Brown. Their influences dwell in every corner of the record store. "We’re in the van so much and there’s a lot of time to listen to music," says Hughes. "So we just try to collect as much different kinds of music as we can, just to see what’s going on and what other bands are doing. We get tired of the same old thing after a while. We’ve been listening to a lot of Sparta and Hot Hot Heat, and Hot Water. All those records are really amazing. It’s good being in a band with 6 guys because one person will bring in something you never would have thought of and it turns out you really like it."

What’s next for Flashlight Brown? Touring. More touring. And probably more touring after that. "We want to do this for a living," says Hughes, "and the only way you can do that is through a lot of touring and a lot of hard work. And in the near-to-medium future we’re just going to be on the road constantly, trying to get our music out."

"The driving is long," he continues. "But it’s a good job, you know? We’ve all had crappy jobs in the past, the nine-to-fives or the flipping burgers job. This is quite the step up, I’d have to say. I’d be a computer programmer if we didn’t have the band, Tim would be working in a crappy office and I don’t know what the hell Fil would be doing. He’d probably be taking over the world his own way."