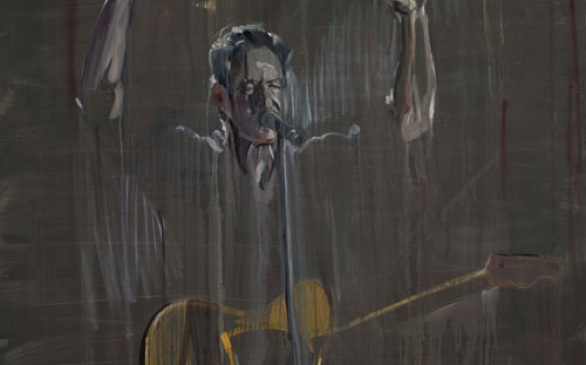 MusiCares 2013 selected artist Zhenya Gershman, known for her psychological and emotionally charged paintings, to create a portrait of this year’s honoree: Bruce Springsteen.

Each year, in conjunction with the GRAMMYs, MusiCares holds a gala honoring a music icon for artistic excellence and philanthropic work. The 2013 MusiCares Person of the Year gala celebrates the legendary singer and songwriter Bruce Springsteen with performances by Elton John, John Legend, Patti Smith, Sting, Neil Young and more, and will take place on Friday, Feb. 8.

Gershman explained that she was interested in capturing the person behind the pop image and immersed herself into Springsteen’s world. She went through countless photographs, watched videos and studied the lyrics to his songs.

“The lyrics revealed a complex range of emotions and allowed me to get an intimate vision of Bruce,” she said.

Gershman also had to decide which Springsteen she should portray.

“Do I paint the 20-year-old rebel, a sexy rock star? Or a middle-aged man, yet still-going-strong musician?” asked Gershman. She soon found she was creating a body of work: the “Bruce Springsteen Series.”

“I hope that through these images the viewer gets an intimate glimpse into Bruce Springsteen’s soul – the magic of portraiture of getting to know someone without ever meeting them,” she said. “This series represents more than a face but a reflection of the depth of his lyrics and philosophy of a real man for real people.”

The life-size portrait of Springsteen, titled “The Boss,” will be part of a silent auction at the gala. The estimated value of her painting is $25,000 but is likely to fetch a much higher price since the proceeds will benefit other musicians through the MusiCares Foundation, which offers programs and services to members of the music community.

“I feel so blessed that I am able to help out with my art,” said Gershman. “I see the artist’s goal as touching people in a profound way through creativity. In this case, it is possible to make a real impact in the world.”

You can currently see Gershman’s work featuring a portrait from the Springsteen series as part of a group show at Leslie Sacks Fine Art, Brentwood. The gallery is known for representing modern and contemporary masters from Picasso to Hockney.

The current exhibition calls attention to the issue of discrimination against women around the world and benefits the organization Women’s Voices Now. Gershman’s art is featured in this unique survey along with 18 other renowned women artists. The exhibition will remain on view through Feb. 25.