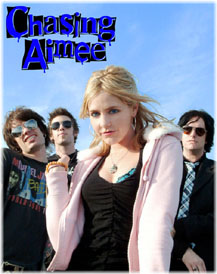 Untitled Document "What about the time that whore took a shit on our stuff?"

"We have a lockout space and there was this chick there before us and in the morning we came in and on top of the bass drum case you could distinctly see where the buttcheeks had been," continues guitarist, Brett "Stress" Walker.

Not exactly the stuff rockstar dreams are made of, but it goes with the territory when you’re an upstart band looking for your niche.

It all sprouted earlier this year when actress-cum-singer, Chadwick returned from filming a couple of B-class horror movies in Romania. Upon landing back in the States, she was drafted for her Barbie doll face and choir class voice by an unnamed producer in the hopes of forging another pop princess. But after recording an album and putting together a live band, Chadwick decided that having songs written and subject matter chosen for her wasn’t how she wanted to get into the music business.

"I know there’s a lot of crappy music out there, music that’s commercial and [people] will buy but doesn’t have any substance to it. I’d rather they … listen to this and get something out of it rather than just saying, ‘it’s cool.’" Even having her dream gig handed to her tasted bitter under compulsory terms, "We played the Roxy and that was my dream and I was like, ‘I hate it, I hate it, I can’t do it; it’s not me.’" Luckily, guitarist Stress, bassist Patrick, and drummer, JD had already formed a band and were looking for a singer; the timing was impeccable.

Breaking away from prêt-a-porter, she turned inward to find her muse. The result being music that is straight out of her life’s journal: "For instance, I know somebody who got married while they were drunk … and they only knew each other for two weeks … they realized they didn’t know each other and had to end it," Chadwick says.

Ill-fated Vegas weddings don’t seem to be in Chasing Aimee’s future, though, "[fan response] has been really positive," Brett says. "We played this place called The Brig and it’s a really punk rock bar … with skulls and a bar made of skateboard decks … and that was one of the shows I was most worried about … but it was one of the best we ever played," he continues. "People were giving me shots on stage because it was my birthday," Aimee recalls fondly.

If you suspect it might be difficult for an established actress to move back into the world of the unknown underground of LA rock, a second opinion’s in order. Chadwick recalls, "When I came out here, I had nothing … I could have had success if I wanted to sell myself … but I like the struggle … I’d feel worse having movies out and then having to get a job."

But one without the other doesn’t seem like a reasonable possibility, "I need to write music all the time. The way I grew up, it all came hand in hand; I did a lot of theater and for me, [music is] just another way of expressing myself. I can’t have one without the other."

That seems to be just what the future holds. With a music attorney secured, a few songs licensed out to films, a wailing live show, and past dues paid (Dressed in a cheerleading outfit, Chadwick once worked at Six Flags New England where passing kids would throw food at her) the quartet of Chasing Aimee are ready to do what comes naturally: playing some real rock and roll.