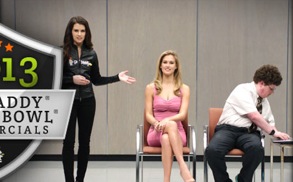 Ok, it’s the Monday after the Super Bowl, and obviously there’s only one thing to discuss: the commercials. This is simply a matter of opinion, but personally, there were a few that made my best and worst list.

Let’s start with the worst.

The make-you-feel-awkward-while-sitting-with-your-family GoDaddy make-out commercial:
Sure, I get the idea behind it: smart meets sexy, throw in model Bar Refaeli and a nerd, and these are the ingredients for a great Super Bowl ad. However, it went a tad into disgusting territory. The sound effects? Too much. The long make-out session? Too much. This commercial? Too much.

The Coca-Cola commercial that let everyone down:
This commercial is simply bad because it wasn’t good. All it had was a cliché chase scene to a Coke bottle…and that’s it. It’s the Super Bowl, and you’re Coca-Cola! Simply put, we expected more.

The Dodge farmer commercial:
So, a lot of people think this was one of the best, and yes - aesthetically, it was genius. The dramatic monologue, the visuals – it was touching. But two minutes about “the farmer inside all of us” is just not for me. An ode to farmers...really? I much more appreciated Oprah’s ode to soldiers. There is no farmer inside of me, Dodge.

The Budweiser horse reunited with man ad:
Kudos Budweiser, kudos. How can you not feel touched by this commercial? The horse and man share a bond. They’re torn apart, the man thinks the horse has forgotten him, and low and behold, they are reunited and run to each other in a dramatic embrace. Loved it.

Audi prom ad:
This commercial wasn’t anything extraordinary, but how can you not root for the shy kid who finds the courage to kiss the girl and doesn’t even care that he got punched? You go, kid! His smirk at the end while driving away in his Audi was priceless. Good job, Audi, for actually making a commercial relevant to what you are selling.

Amy Poehler and Best Buy:
Well, to be honest, they had me at Amy Poehler. This commercial makes the best list because it didn’t try too hard, and it was funny. That’s enough for me.