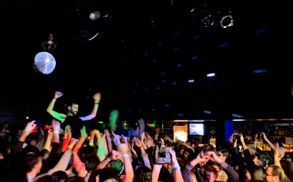 Geographer's Michael Deni jumped into the sea of fans at the Echo.
(Credit: Josh Herwitt)

It’s not often these days that you find the words “cello” and “rock ‘n’ roll” written in the same sentence. But when it comes to San Francisco’s Geographer, such an unconventional pairing has only allowed the indie rock outfit to stand out from its contemporaries.

Since its inception more than four years ago, Geographer has captivated audiences both far and near with rich textures and soulful melodies. It’s why the trio was voted in 2008 as “one of the three undiscovered bands you need to hear now” by Spin after its debut release, Innocent Ghosts.

The real question, though, is: When will some fans finally realize that cellist Nathan Blaz isn’t actually playing a violin?

That happened to be a common misperception on Friday night at the Echo as various bystanders amid a sold-out crowd voiced their approval of Blaz’s “violin” — with nary a hint of comedic relief — during Geographer’s final show of its first headlining tour.

Earlier in the evening, ON AN ON broke the ice with a surprisingly provocative performance after releasing its brand-new album, Give In, just days before. The former Scattered Trees lineup has worked over the past year on reinventing its sound, and much like Geographer, it may not be long before the band is booking bigger rooms on its next nationwide tour.

By the time ON AN ON’s set had concluded, bodies stood side by side from the front to the back of the venue as our anticipation mounted for Geographer’s arrival. In fact, it had been more than six months since the band last played in L.A. after turning a corner with its appearance at last year’s Outside Lands Music and Arts Festival.

So when Blaz, drummer Brian Ostreicher and frontman Michael Deni finally stepped onto the diminutive stage just after 11:30 p.m., it didn’t take long for the audience to let loose.

Songs like “Life of Crime” and “Lover’s Game” off the band’s sophomore studio effort, Myth, had more than a few hipster chicks holding onto every word Deni crooned as he traded off between his guitar and synthesizer. The New Jersey native, who relocated to the Bay Area in 2005 after a series of deaths in his family, sounded just as good as any recording we’ve heard from Geographer up to this point. And he even made sure to spend some time with the fans, stepping into the crowd to sing part of one song before later leaping into a sea of hands for a bumpy ride across the dance floor.

It was quite a way to go out for Deni and his band mates, who were introduced to the singer-songwriter at a local open mic night after attending the Berklee College of Music.

Yet, it was Geographer’s hit single “Kites” midway through its 90-minute show that undoubtedly received the loudest response as Blaz, who also doubles on synthesizer, charmed us with more soothing cello lines.

This isn’t your typical rock ‘n’ roll band, but its pieces fit together just fine.