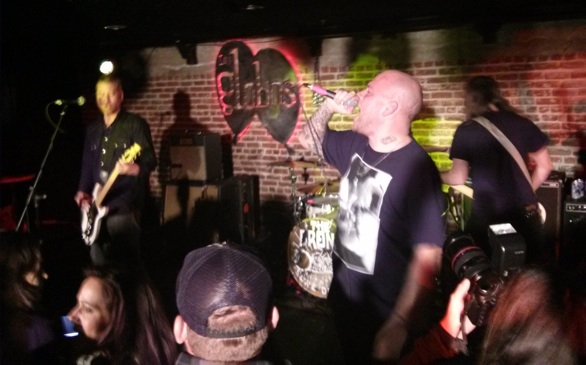 If one were to make a guess what the sweat-drenched, exhausted individuals stumbling out of Los Globos on Saturday, Feb. 2 had just experienced, your third or fourth guess might be correct. Right behind sauna testing, sweatshop labor and spinning class would be a punk show – a loud, rambunctious punk show featuring LA’s own The Bronx, who is returning to its roots after a five-year hiatus playing mariachi music as alter ego, El Bronx.

The slow-moving crowd warmed up to grossly overpriced cocktails inside the second floor of the old fashioned Silverlake night club as openers Death Hymn Number 9 took to the stage around 8:45. The band members channeled the ghost of Heath Ledger with their face paint and disheveled hair as they immediately got the crowd moving with immense energy and 90-second long loud punk songs. Their diminutive front man spent roughly half of the set in the crowd, a fun detail that would remain true for The Bronx’s set thanks to the lack of any real stage higher than a foot. Death Hymn Number 9's guitarist played from a chair for some reason, where he could be seen seizing and playing any which way as if possessed by a demon.

After 20 or so minutes of silence, the amped-up audience was left baffled and confused as two male strippers came out and gyrated on stage like extras from Magic Mike. But eventually, the band came out, and the crowd instantly erupted into a veritable riot. The band wasted no time diving into their very, very loud set. The Bronx’s years standing around on stage in mariachi gear did nothing to dull their energery, and it might have well serviced their set extremely well. They played a great mix of new and old, including plenty from latest self-titled release, The Bronx (VI).

With a rowdy pit full of impassioned punk fans turning up the heat, Los Globos turned into a sweaty, stinky hot box. The venue, again, is lacking in the sense of having a stage, which worked wonders as Matt Caughthran spent at least half the time running around in the crowd. Several people, including yours truly, left looking like they had just jumped into a pool upon leaving.

Being described by one 40-year-old, 300-pound fanatic as “our generation’s black flag,” The Bronx gave everyone in attendance one hell of a high-energy experience.

The band will be setting off on a world tour in support of its latest album. Wherever their adventures take them, fans worldwide can look forward to one of the most unquestionably entertaining live shows around.