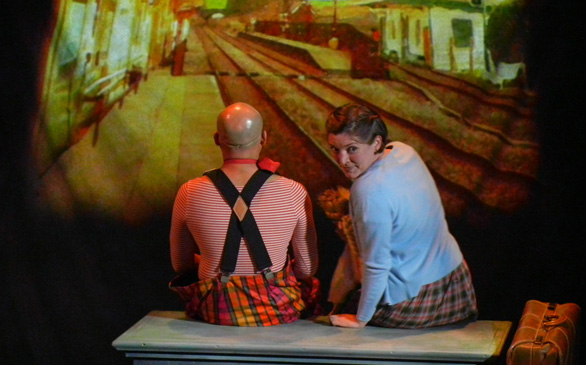 I didn't expect to see such a big crowd at the lobby of 24th Street Theatre Saturday noon. In fact, I didn't know what to expect of the play, "Walking the Tightrope." However, everyone was eagerly waiting to see it. My expectations soon came, and they rose even higher from beginning to end as I was watching the play, which got better and better as it progressed.

"Walking the Tightrope," 24th Street Theatre's latest theatrical release that runs through March 30, is set in an England coastal town. There, the sun luminously shines and rain pours down like cats and dogs. That's precisely how I will categorize the one-hour long play: At times, it is joyful and sometimes tearful, but it is still filled with a delightful plot of smiles and emotional drama. The utterly entertaining and impeccable cast is composed of Paige Lindsey White as Esme and Mark Bramhall as Grandad Stan.

This piece, which is solely dedicated to depict the love and bond of grandparents and their grandchildren, is quite the treat. White, who earned her MFA in acting from UCLA, delivers a memorable performance. Bramhall, on the other end, makes his character so believable that I felt as if I was a part of the story.

"Walking the Tightrope" is, indeed, a magical play taking us into a lovely journey of a kid and her grandfather. Throughout the entire time, I could recall several memories of my own youth when I visited my grandparents.

What really worked well in "Walking the Tightrope" was White's ability to portray such a young character with no problems whatsoever. She produced many laughs and tears from the audience. On top of that, the stage set provided an original touch of England since it included images of a costal town.

Truthfully, the play could have been around 90 minutes long instead of an hour. That's simply because it deserves to be a bit longer, perhaps with an intermission. But with that said, sometimes when a play is shorter, it's sweeter. And that's certainly the case with "Walking the Tightrope," a theatrical must-see piece.

For more information about "Walking the Tightrope," click here.