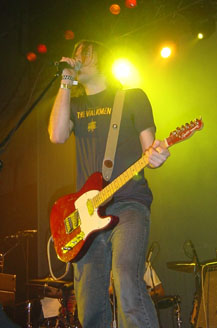 Untitled Document Seeing Broken Social Scene live is a lot like having Thanksgiving dinner. It always almost seems like too much on the table and on your plate, but in the end you are left completely stuffed, full with content and satisfaction.

It would almost seem out of convenience that Feist (first name Leslie) would open for them, but it was more out of pure logic. Why try to find another couple of bodies to fill the already crowded BSS tour bus when you can use one of your own?

Feist has found recent success with her latest solo, major label debut record, Let It Die on Interscope Records. Her set made an appropriate appetizer for the evening’s musical smorgasbord at the Music Box at Henry Fonda Theatre in Hollywood. She played mostly tunes from the aforementioned album, but also included a new bluesy song and a few from her first rare, out of print release. She ended with the subtle and powerful number titled "Intuition," which left the crowd impressed and craving more of her creativity in the next portion of the show with her Canadian comrades.

After a short break, it was time for the main course. The stage became a canvas for the collective of musicians calling themselves Broken Social Scene. They overtook the venue the same way an army would, in sheer number and skill in execution. The number of band members on stage looked like it bordered on maximum capacity, having anywhere between 8 to 20 on board. At the utmost, BSS provided a brass choir (1 to 4 trumpets, a saxophone and trombone), four guitarists, one bassist, a violinist, two drum sets beating simultaneously, and if that wasn’t already more than enough, they threw in a harmonica and tambourine just for good measure.

Thankfully for the audience, the band’s performance did not lean one way toward quality or quantity, but rather was a concrete combination of both. It’s hard to say there was a leader in the massive group but vocalist/guitarist Kevin Drew would be the closest thing to it, interweaving his silky voice and lyrics through the complex sound structure of all the instruments in play. The elaborate and defined guitar melodies stuck tightly to the rhythms laid out by drummer Justin Peroff (and secondary drummer Johnny Crossingham, who dabbled with guitar and background vocals).

The mostly male collective was balanced out with sweet and soothing vocal stylings of Lisa Lobsinger and the rocking wails of Feist. Fans danced wildly to the set list consisting of mostly new tunes from the recent self-titled release, but also marinated in the classics from older releases, especially You Forgot It in People.

Drew and Feist shared a moment in a precious slow dance during "Lover’s Spit," and intense dancing from the performers and audience during "Fire-Eye’d Boy." BSS went through over 15 songs in almost two hours’ time, making it seem like it wasn’t enough.

But as pointed out earlier, BSS proved they are more than enough. —Helena Ngo