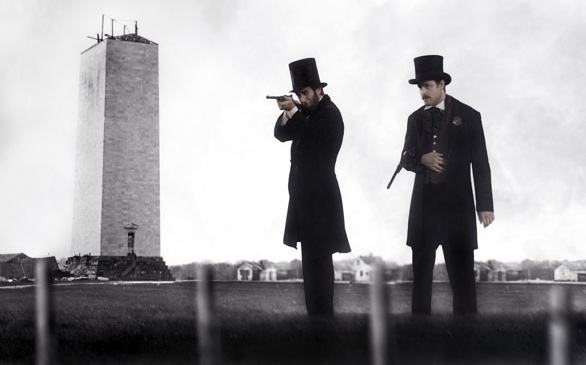 This year was the year of Abraham Lincoln movies; from his final months in office to fighting vampires, Lincoln’s been booked solid. But if you’re a true history buff and appreciate Lincoln not for the modern-day moneymaker he is, but for the true American hero and wartime president he was, there’s one more movie you need to see: Saving Lincoln.

Saving Lincoln is actually the story of Lincoln’s best friend and confidante, Ward Hill Lamon (Lea Coco). Lamon, a banjo-playing jokester, happens to be big and handy with a gun and appoints himself the president’s bodyguard after the first assassination attempt on the president’s life in 1861. What follows is a story of friendship and hardship told in a way you’ve never seen before.

Much like Lincoln himself, director Salvador Litvak and his movie are the underdogs in a fight for predominance in today’s Lincoln-obsessed world. Litvak realizes he’s going up against Spielberg in a way, but he cares too much about Lincoln to let that stop him.

“I was always a tall, skinny guy and a redhead,” he said. “I was a funny-looking kid, and I looked up to this guy who was obviously an outsider… but left to his own determination, he rose to the top.”

Explaining that no big studio would even hear him out, Litvak said finding funding for his David was difficult when all the studios knew about Goliath.

“[Spielberg] was making this big project,” Litvak said, “so as long as he was making his, no one was helping us make ours.”

It took all of 12 years, but what stemmed from that rejection ultimately helped save Litvak’s production.

“I said, ‘We have to find another way,’ and from that came the inspiration to do CineCollage,” he said.

Shot entirely on a green screen, Litvak used CineCollage, a technique that allowed what he filmed to be overlapped on old Civil War photos, to virtually create a film out of nothing but photographs. With crisp, breathtaking quality, Litvak made a film that looks like a box office smash on an indie budget.

“The lenses of those cameras were primitive,” Litvak said, “and even though they’re 150 years old, the negatives are incredibly large. You can fill a movie screen with just 5 percent of the image.”

Finding these negatives at the Library of Congress and doing years and years of research led Litvak to a stunning realization.

“There was a light bulb moment,” he said. “No one’s done that with image photography, but I bet it can be done.”

And so he did it.

Stills from the movie do not begin to do it justice; combining photographs with live action and adding numerous layers on top of that helped create a dream-like fantasy, shocking since everything you see is real. This technique transformed the movie from a regular biopic to a PBS documentary meets modern sci-fi meets quirky drama.

While some of the dialogue was cliché and soap-opera-esque, Coco’s performance as Lamon was as fascinating as Lamon’s quick-witted personality. When he sings, banjo and all, you’re immediately drawn in.

Music as well plays a major role in Saving Lincoln, noted in particular at the end of the film when Lincoln (Tom Amandes) requested that “Dixie” be played at a rally, to the audience’s chagrin. It seemed to be a character all its own and, along with the photographs, added a layer of authenticity.

Latvik said he’s proud of the movie, and creating it in his unique style was liberating.

Historically accurate and visually stunning, Saving Lincoln is a must for any Lincoln enthusiast.

Saving Lincoln plays in Los Angeles Feb. 15 -21 at Laemmle's Music Hall 3. There'll be a Q&A with Filmmakers & Cast all week.