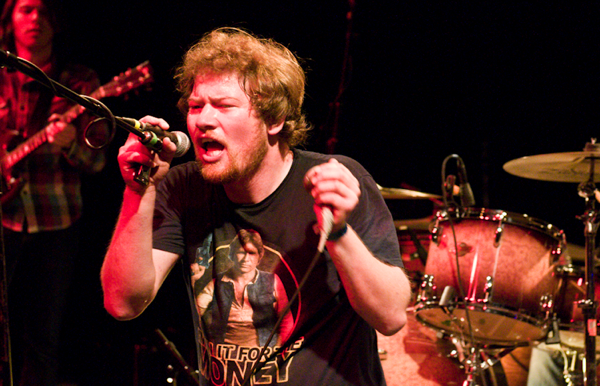 The Stone Foxes got the crowd dancing and singing prior to Trombone Shorty's performance.
(Credit: Tamea Agle)

A sold-out venue greeted the Stone Foxes on Friday night at The El Rey in Los Angeles.  While they were not the headlining act, they put on a headline-worthy set.

The Stone Foxes opened up for Trombone Shorty, who attracted an interesting audience filled with middle-aged couples on dates and Mohawk teens head banging in the front row. Regardless, everyone there was very into the music. New and old fans were cheering and dancing by the middle of the set.

The Stone Foxes’ set list was half old and half a celebration of the new album. While the audience couldn’t quite sing along with all of the words to the new songs, they went along with the beats.

Dressed like a homage to the ‘90s grunge era with a hipster twist, the guys lit up the stage, most of them constantly switching instruments. The band began its set with “Cotto” from the new album Small Fires, and the audience erupted and danced more than most L.A. audiences will dare to.

The band’s newest single, “Everybody Knows,” was my favorite of the night, and it played well in the middle of the set. The song is jam-packed with political cries for the 1 percent and is also from Small Fires. The band played it with pride, and it gave the members a chance to switch it up a little bit. Shannon Koehler, normally on drums, came out to take over as a harmonica wielding front man. Keeping the audience dancing toward the end of the night, he yelled to the crowd, “There is a lady up here shaking it! Everyone else should join her! C’mon L.A.!” Nearly everyone obliged.

The Stone Foxes have been making their way around the west coast since their very popular show at the 2011 Outside Lands in the Bay Area. The band is quickly growing a reputation for producing incredibly enthusiastic and energy-driven live shows. Keeping company with the likes of the Black Keys and Muse in the last year gives you an idea of the shows they are striving to achieve.

Throughout the set at the El Rey, each band member had his moment in the spotlight. Koehler took his time at the front while Aaron Mort took his place at the drums. Not one to hide behind the keyboard, Elliott Peltzman, the newest addition to the band, made his way to the front for a song as well.

The band closed out their set with a harmonica heavy “Mr. Hangman” from their 2010 album Bears and Bulls. With a genuine “thank you” to the audience, the guys left the stage to Trombone Shorty.