System of a Down: System of A Down Continues to Rage with Hypnotize 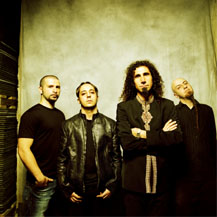 Untitled Document "It starts off like you want to kick somebody’s ass, but it ends like you want to hug your mom and cry on her shoulder," says Shavo Odadjian, bassist for System of a Down, describing the intensity of songs that end with a lullaby on their newest release, Hypnotize.

The companion album to Mezmerize, released in May 2005, Hypnotize shares the same frantic, hard-as-nails, wildly original rock tunes that only SOAD can deliver. The songs were written during the same phase in the band’s life, which explains why the music locks together like a puzzle piece, with Mezmerize’s "Soldier Side" intro and Hypnotize’s "Soldier Side" exit, an actual split of one song.

But according to Odadjian, the songs were originally written for one album, entitled Mezmerize/Hypnotize. "It’s like an artist who has two canvases," he says. "He paints on them together but then he takes one away. Six months later, you get the other piece of art and they come together to make one. But you will always look at it as one painting; that’s what these albums are."

Flashing back to the band’s beginnings, System’s members grew up in Hollywood – Daron Malakian, Serj Tankian, John Dolmayan and Odadjian – yet were often touted as being from Glendale, a city near Los Angeles where Malakian and a thriving Armenian community reside. Odadjian insists that SOAD is a Hollywood-based band, yet gives loving credit to the Armenian fans that supported them during their days as a struggling local band.

In fact, getting their first local gig, admits Odadjian, was a struggle in itself. "I was managing the band and we had no demo [tape], we had no money, but we wanted to play a show," he explains. "I was working at First Interstate bank and between wire transfers, I would be calling the Roxy. ‘Hey, can you give us a show, man? Eddie, give us a show.’ He’d say, ‘I need a demo tape, I can’t just give you a show.’ In five minutes, I’d call again. One day the Roxy just blew up and said, ‘Fine! Go sell 75 tickets.’ We sold 150."

It was May 25, 1995 when the band first played the Roxy on Hollywood’s famed Sunset Strip, oddly billed with six Ska bands. Yet the moment when SOAD took stage, "All these Armenian people just ran into the club," remembers Odadjian. "It was so funny, they were hanging on the rafters. I saw Ska kids flying from one corner to the other – checkered socks in the air! One even landed onstage. It was like a movie scene: a rush, chaos, then everyone was gone. People were saying, ‘What the hell just happened? Who was that?’"

Rick Rubin, head honcho at American Recordings, found out exactly who they were and signed System to his label. Consequently, Rubin produced each of their five albums, including 1998’s self-titled debut which introduced mosh-pit favorites "Sugar" and "Suite-Pee," and their 2001 breakout, multi-platinum album Toxicity, which scored hits with "Aerials" and "Chop Suey!"

Along with the music, the band is also known for their biting lyrics – often comical, yet socially and politically charged. Not one to speak without doing, System actively works toward positive social change. "People have the misconception that we’re a political band, and we’re not," explains Odadjian. "We’re a band that is about what’s happening in society."

On September 27, 2005, the band teamed with Axis of Justice (headed by Serj Tankian and Audioslave’s Tom Morello), the Armenian National Committee of America (ANCA), the Armenian Youth Federation, and their many fans for a rally to pass legislation to officially recognize the Armenian Genocide. During the years between 1915 and 1923, a total of 1.5 million Armenians were killed at the hands of Turkey. Sadly, all four members of SOAD lost family to this horrific event.

"I’m not going to talk about politics, I’m going to talk about us as humans. It’s all about living your life righteously and having other people take example," says Odadjian. "It can be a chain reaction. We’re a unit, we’re all together, we’re all connected. What I do affects what might happen in Iraq or China or Japan or anywhere else, in time.

"Nice people are a minority in today’s society and that’s a shame. All those assholes are out to get the nice guys, [and] all the nice guys said, ‘Fuck this shit. Nice guys finish last.’" That phrase should not exist anymore, because if you say something enough, it will happen."

So it seems, System of a Down will continue to live by the words written on the back of their 1998 debut album: "Open your eyes, open your mouths, close your hand and make a fist."

Interviews
How a trans indie-rock star made the record of their life, with the help of some new housemates
1,294 views

Interviews
Boys will be Baby Boys in the latest spinoff album from Hippo Campus
1,132 views