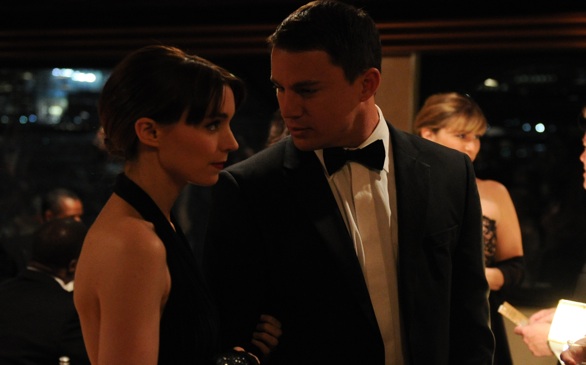 In Steven Soderbergh’s Side Effects, Emily (Rooney Mara) is an insider trader’s (Channing Tatum) wife, and her husband’s return from prison deeply affects her. After dealing with losing the lifestyle they were accustomed to, they must face the reality that they may not be able to rebuild what they once had.

Emily then enters into a deep depression and is unable to cope with their situation, forcing her to attempt suicide. When Dr. Jonathan Banks (Jude Law) prescribes her a new drug he created, her health improves. However, a string of bizarre events starts to happen, all seemingly resulting from the pills she takes.

Emily is the key to the story. However, Mara’s performance of her clinically depressed character was weak. She did not show the various shades of emotions that people who suffer from the condition actually exhibit. Even when you take the twist at the end of the film into account (which you can see coming, by the way), there is no reasoning in her actions to justify the character’s motives. While Tatum has improved dramatically as an actor, the relationship the story is founded on is simply not believable.

Law and Catherine Zeta-Jones, who plays Emily’s old doctor, were the only ones who gave great performances. When Law’s character received media backlash for apparently being the one to blame for the terrible effect the drug had on Emily, you can see a character arc. You have a man who starts off being someone with a prosperous life, and then he gets involved in a game beyond him and the media circus tears him apart, causing him to lose everything. Law executed that descent into despair in a believable and crazed manner, while bumping heads with Zeta-Jones’ character who knew more than she let on. Being a good antagonist, she pushed him to find out the truth of what really was wrong with Emily.

All Side Effects really needed to keep the viewer intrigued was an interesting and talented lead that could handle a character that is meant to misdirect the audience and carry a movie. The film suffered from not being able to convey a smart commentary on the medical field due to the weak and hollow characterization of Emily, who was supposed to be a protagonist you cared about in order for the story to work.

But it might not be completely Mara’s fault; she has proven that she can take direction well if it’s given (as seen in The Girl with the Dragon Tattoo). Thus, perhaps all she needed was better direction.

Side Effects is currently playing in theaters.