Celebs Gather to Back Music, Digital Media Programs for Next Generation 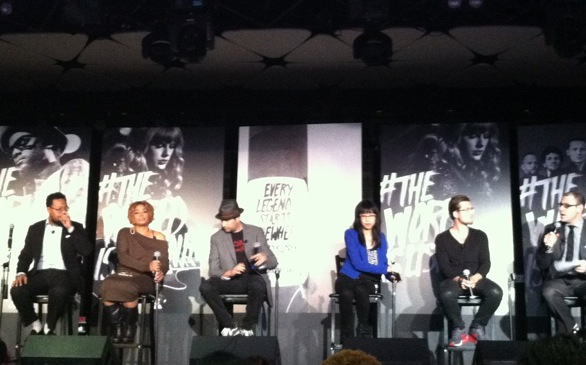 T-Boz stressed the longevity of an artist is something that can’t be bought. In the past, people could say, “We’re number one!” but the dedication and performance is what really counted – now, it’s no different. Sure, you can buy fans and followers, but your authenticity to your fans online via Facebook or Twitter to communicate your passion, beliefs and what you produce is what makes you real. The panelists all seemed to be in agreement with T-Boz when she said, “Real artists stand out.”

Linkin Park’s Mike Shinoda was also on hand to introduce a revolutionary new music program for aspiring artists. The GRAMMY Amplifier program was started in conjunction with the Recording Academy’s Evan Green and Hyundai senior group manager Jon Budd. Shinoda will act as a mentor in this program, which invites musicians to create a profile so they can receive services that help them reach professionals and their audience.

How exactly will the program work? The more votes from audiences, the more “amplified” the artists will become, and the top acts will receive access to program curators: Linkin Park, Ozzy Osbourne, Kelly Clarkson, RZA, Kaskade, My Morning Jacket and Snoop Lion. As part of the program, the three most popular acts will receive awards that include a recording session with a leading GRAMMY producer, the production of a music video and the opportunity to open musical fests.

The festivities at the Conga Room closed with Timbaland hosting an event for youth forum program mPowering Action, which is the first ever entertainment initiative that enables youth to gain access to education, job and health resources through various Internet platforms via their mobile phone. Users will also be able to explore and join in the fight to change social issues relevant to them. Supporters of this program include Twilight’s Kellan Lutz, NSYNC’s Joey Fatone, N.E.R.D.’s Pharrell Williams and many others. The night included performances by Timbaland and a set by DJ/producer Avicii.