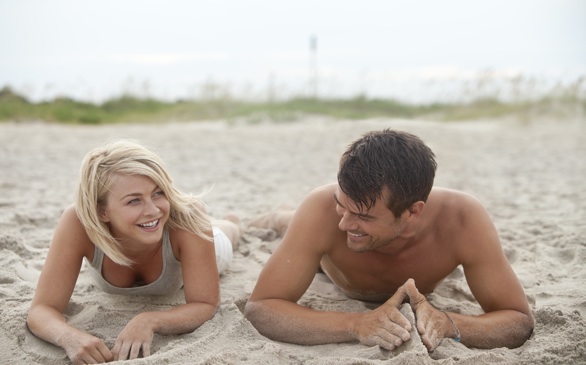 Nicholas Sparks - novelist, screenwriter, legend – needs no introduction. Any film “based on the novel by Nicholas Sparks” is guaranteed to make you die laughing and crying at multiple parts throughout the screening. Message in a Bottle (1999), A Walk to Remember (2002), The Notebook (2004) – he’s no amateur when it comes to creating romantic dramas.

Number eight on Sparks’ list is Safe Haven, which is appropriately releasing on Valentine’s Day this year.

Julianne Hough stars as Katie, a woman who, for one reason or another, is looking to escape her past and start fresh in a new place. She stumbles into Southport, N.C., a quiet fishing town that is just a pit stop on the way to Atlanta. It is in this little, unassuming place that Katie gets a job as a waitress and rents a run-down cabin in the woods to start anew.

Alex (Josh Duhamel) owns the local mart and is raising his two children, Kristen (Mimi Kirkland) and Josh (Noah Lomax), after his wife tragically dies. Naturally, Katie is hesitant to get involved with Alex at first because she is still scarred by her mysteriously troublesome past that involves abuse, the police and a murder charge. However, like all good Sparks stories, Katie is able to let her guard down, and the two fall madly in love. The past isn’t completely dead, though, and Katie must face it one last time before she can claim her happily ever after.

For those readers who love Sparks, this is right up your alley. It isn’t the best Sparks adaptation, but it’s far from the worst (Dear John, anyone?). The Sparksian twist isn’t too hard to spot from several miles away, but it evokes plenty of waterworks nonetheless.

Sparks’ movies are known for those the quintessentially romantic moments. In Safe Haven, they take place in a boat, then in the rain, then in an old diner where they are left to talk, dance and be alone in blissful isolation. These are the scenes that we so desperately yearn for from Sparks.

Swedish-born director Lasse Hallstrom is no stranger to this genre. Known for his work with dramas (What’s Eating Gilbert Grape, Salmon Fishing in the Yemen), he also has a varying past with romantic comedies. The other Sparks adaptation, to which I so rudely alluded earlier as being the worst in his repertoire, was also a Hallstrom film. However, he helmed Chocolat and The Cider House Rules, two masterfully and wonderfully romantic films.

With this experience under his belt, Hallstrom has a distinct eye for evoking the most out of his viewer in the height of the film’s dramatic scenes. In particular and without giving away the ending, he guides us seamlessly through the revelation of what specifically Katie is hiding from. I also dare you not to choke back tears by the ending scene. Touché, Hallstrom, touché.

However, a romantic “dramedy” cannot succeed without capable actors who must be able to channel the intended emotions, make us fall in love with them and stay clear of being too gimmicky. In this film, Hough and Duhamel are wonderful; there is a certain lightness to their performance that allows us to flit from scene to scene without getting wary of the inevitable clichés that plague every film of this genre. The fact that both are extremely attractive doesn’t hurt the bottom line of this review either.

Furthermore, Hough is a strong female lead as Katie. She isn’t quivering in fear, at least not constantly, and she isn’t dreaming of marriage like so many weaker leading ladies have done in the past.

Ric Reitz makes a menacing antagonist as police Chief Mulligan, and Cobie Smulders (“How I Met Your Mother”) is Jo, a friendly face and shoulder for Katie as she learns to adjust to life in the small town.

One of the film’s faults is that it starts a little rocky; Hallstrom may be a genius with drama, but the opening scene mimics a high-energy thriller that does not crosscut well with tranquil, scenic shots of the North Carolina countryside. However, the film picks up as the romance is laid on thick and heavy.

Overall in this film, the chemistry is not spared – the children mesh with Duhamel and give their own noteworthy performances as young, up-and-coming actors. There are far worse movies you could spend your money on, especially in the first two months of the year, which are notorious for being used as release dates for the movies studios want to throw in the trash.

It may not be Casablanca or even Chocolat, but Safe Haven is a nice little flick with heart to see this Valentine’s Day.