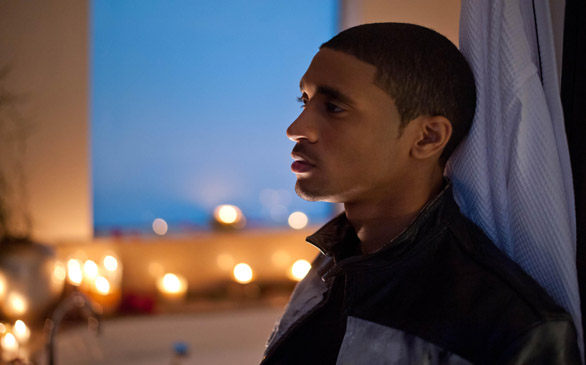 Jarvis is a R&B musician on the rise.
(Credit: Adrian Sidney)

When someone discovers a passion for music, it’s always different. Artists, particularly music singers, experience it in a variety of forms. For Jarvis, however, discovering his passion for music came at an early age.

“I was watching Michael Jackson (on television),” said Jarvis during a telephone interview from Atlanta. “He was doing a show, and he did his spin, stood on his toes and grabbed his crotch and made the 'whoo' sound. From that day forward, I knew that's what I wanted to do.”

Jarvis, a rising R&B star who signed with Capital Records in December 2012, added that he grew up singing at church in his native Tulsa, Okla. He wasn’t sure if he’d like to follow a career as a vocalist or musician, but that was until the moment involving Michael Jackson, one of Jarvis’ most prominent musical influences over the years.

He grew up listening to gospel music, but also other sounds, including James Brown, Prince, Bobby Brown and Usher.

The 23-year-old, who was born Jarvis Shaffer, now resides in Atlanta – having relocated since the age of 14. Oklahoma and Georgia are different, according to Jarvis.

“They are a lot different,” he said. “Where I’m from, it’s a small country town: some people own horses and are cowboys. There just aren’t many outlets. There’s not much going on. That’s the main difference between Tulsa and Atlanta. When I came here, there was just so much happening. Everyone’s always moving, so much going on, so much to be seen and heard (and) so much to take in. I’ve never left since.”

There, he signed with Grammy Award-winning producer Jermaine Dupri’s So So Def Recordings. After presenting the singles “Radio” and “Pretty Girl” featuring Lucadris, Jarvis released a mix-tape titled Heartache in September 2012.

Heartache featured collaborations from DJ Khaled, Waka Flocka Flame and Lil Scrappy. Jarvis mentioned that the project tackled his relationship with music and other things.

“It originated form my life as a whole,” he said. “It wasn’t just about a relationship heartache with a woman; it was about my relationship with music, my love, my passion – what I put everything into. It addresses shortcomings, and how when you put so much into something, it shouldn’t treat you that way. I basically use music as a metaphor for love.”

Jarvis, who in his free time loves watching movies and playing sports even though both are rare, said that that’s where the name Heartache came.

For Jarvis, other spare time activities include spending time with his family and friends. He also likes to hit the music studio and be creative. Basically, his professional practices and hobbies revolve around music.

“That’s just a part of me,” he said. And that’s the way it’s been since, well, forever – particularly because his older sister inspired him since youth.

“My sister was always a big mouth, big talker, a big everything,” said Jarvis with a laugh. “Her being so vocal about everything she wanted to do inspired me to take the next step, outside of singing in church. To this day, I would thank her for my way of singing. She would always come home from choir class and teach me things she learned: new harmonies, control – I would be her guinea pig in a way. I learned so much through that, and that’s how she’s been an inspiration.”

An inspiration that’s led him to formulate his upcoming debut album, Cardiology, which is slated to hit the music waves later this year. Cardiology carries the first single “Make A Little Room” and is now available on iTunes.

“It’s about a love triangle and having a female wanting to step out and make different choices, which is fine. But in a situation like that, you leave the other individual in the relationship isolated,” confessed Jarvis as he talked about the significance of the lyrics. “So in the song, I wanted to ‘Make A Little Room’ for another person while she figured out whether she wanted to be with me or not.”

For Jarvis, it’s always been about portraying life experiences in his songs. He acknowledged with no hesitation that he personally brings passion and emotion into his music.

Despite his past, current and ongoing success, Jarvis manages remain humble. After experiencing life the way he has, he says he’s here to musically please fans.

“Now that I have (experienced life), I try to definitely put all of me in every single record that I do,” he said. “It gives the fans a better chance to relate. Also, it gives me a better chance to connect with my fans, just have a realistic approach all around. When I perform it, you’re going to feel it. When I sing it, you’re going to feel it. You can hear it in the vocals that it is something I’ve dealt with in my life.”

Being true to himself is an unique achievement, especially because he let’s that transcend through his music. Jarvis believes that’s what will make him legendary.

Nowadays, though, his hard work is paying off as he lives his dream.