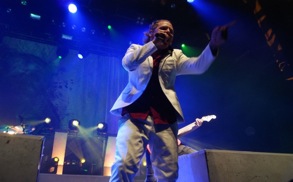 Fans packed the house to see their favorite alternative group, Stone Sour on Wednesday night at Club Nokia. The venue is definitely one of the easiest places to put on a show, and while many other spaces are just dingy clubs and holes in the wall (albeit, much beloved holes in the walls), Nokia is a combination of a music house and theater with a club atmosphere.

Fronted by Corey Taylor, Stone Sour is quite different than the other infamous band Taylor is a part of – Slipknot (Taylor is also the lead singer to this metal mega group). While Slipknot’s shows are known to be more aggressive with the crowd moshing along to the band and where the members are most recognizable by their twisted masks, the members of Stone Sour came out in very dapper get-ups.

Taylor wore a white suit and maroon dress shirt, which, as the show went on, got totally ruined by massive sweat stains. One of the guitarists wore a red bow tie. The crowd members, however, came out dressed in their metal black best with band tees and chains. I could imagine the entire affair would have been quite different if they, too, dressed formally.

On this night, the faint smells of marijuana smoke (I’m sure people had medical marijuana cards) permeated the air as Taylor took command of the house. Taylor is definitely one of the best alt-rock and metal vocalists out there; his singing and screaming sounds better than studio quality, and his vocals never crack.

The band performed tracks from its concept album House of Gold & Bones: Part One as well as crowd favorites such as “Through Glass,” which Taylor performed acoustically.  But “Say You’ll Haunt Me” was definitely the crowd pleaser, and the entire house sang along to it. What’s even cute is that a couple in crowd caught people’s attention when they starting singing this song to each other and being in their own little world.

The entire show was a blast, and Taylor knows how to interact with his audience with funny conversation in between songs and spraying the crowd with water bottles. One of the coolest things the band did was perform tracks from House of Gold & Bones: Part Two, which isn’t due out until April – what a treat!