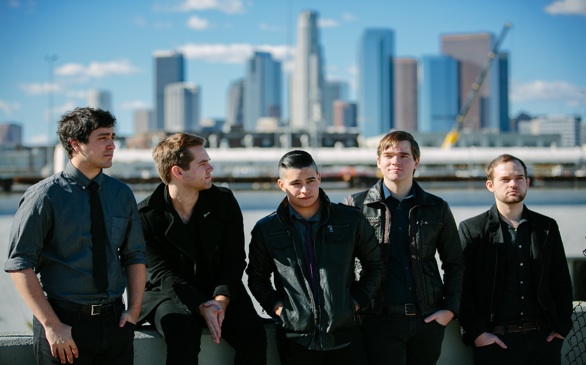 MASTON LURKING IN THE SHADOWS
Multi-instrumentalist Maston (full name: Frank Maston) spent his youth in suburban Los Angeles soaking up sounds created by the likes of Phil Spector, Harry Nilsson and SoCal’s Brian Wilson. Now, he’s released a set of his own tunes influenced by the output of those pop geniuses. This week Maston released Shadows, a full-length album full of haunting melodies and eerie, psychedelic guitar lines that are augmented with keyboards, brass and woodwinds. They’re performed in a style that’ll thrill fans of acts like Animal Collective. Shadows has also been pressed on vinyl in random colors, and you can buy a copy when you see Maston live at Pehrspace on March 9.

SUNSET STRIP GUITAR SCULPTURES TO BE AUCTIONED
If you’ve been on the Sunset Strip in the past year there’s no way you could have missed them – the 10-foot-tall sculptures shaped like Gibson guitars that are part of the Gibson GuitarTown Project. The project is now coming to an end, as the artworks will be auctioned off Feb. 21 and 22 with all proceeds going to benefit the Los Angeles Fund for Public Education’s “Arts Matter” campaign. Included in the auction are the “Electric Warrior” guitar decorated by Shepard Fairey, “Black Eyed Peas” designed by Tsipi Mani, “Cosmic Essence” created by John Kosh and signed by Donovan and more. The public is invited to view all 18 guitars both days from noon to 5 p.m. at Bonhams.

VARIOUS CRUELTIES
The Rodney on the Roq and Jonesy’s Jukebox radio shows are not the only venues giving lots of exposure to British band Various Cruelties; the trio also scored big by having their song “If it Wasn’t for You” placed in the Zales ads that ran on TV all through the holidays and through this week. Fans hungry for more can enjoy a couple of big helpings of Various Cruelties when the band plays the Bootleg Bar on Feb. 21.

CRADLE OF FILTH GUITARIST GIVING LESSONS
Paul Allender, guitarist for heavy metal act Cradle of Filth, is hiring himself out as a guitar instructor. “After being a professional player for almost 20 years, I decided I wanted to start teaching guitar to fans who wanted to learn,” said Allender. “The best way I could think of was to teach over Skype. My lessons have also evolved past guitar; I teach songwriting and arranging and how to use Pro Tools as well as give advice for anyone who wants to get ahead in the industry.” Allender can be contacted at paul@winterlandstudios.com Cradle of Filth plays the Hollywood House of Blues on March 6.

HALF NOTES
THE BOLTS – Irvine-based modern rockers released their full-length debut Wait ’Til We’re Young this week and will headline the Roxy Feb. 16.
GALLO – This L.A.-based duo consisting of brothers Kinski and Rodax Gallo (pronounced Gah-yo) plays multi-lingual worldbeat music, and they’ve just released three albums; Phoenix Rising is sung all in English, Fuego has lyrics in Spanish and Mamawe is bi-lingual.
LEECH – He’s handled production chores for Zola Jesus, L.A. Vampires and many others; this week Leech has this week released Tusks, a 12-inch four-song sampler E.P. of what he refers to as “uncomfortable” dance music.