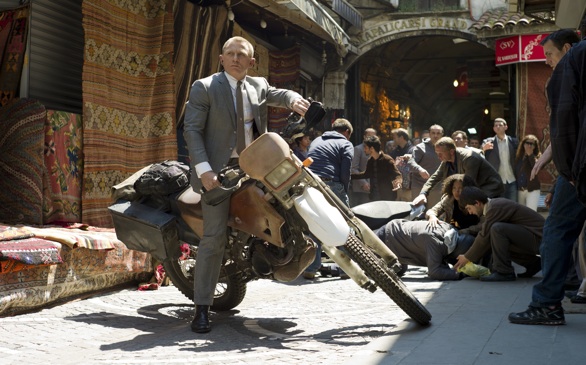 The Majors: Director Sam Mendes injects some classic Bond verve into the Daniel Craig era with Skyfall – its best entry yet. 007 returns to work after a near-fatal injury only to find that an evil genius (Javier Bardem) is threatening to release Crown’s undercover agents’ identity.

Denzel Washington scored another Oscar nomination for his performance in Robert Zemeckis’s Flight. Washington plays an airline pilot who executes some amazing maneuvers to safely crash land his plane. But, in the ensuing media storm it comes to light that he may have been drinking prior to the flight. Don Cheadle and John Goodman co-star.

Tyler Perry leaves the grandma costume at home to fill Morgan Freeman’s shoes as James Patterson’s titular detective/psychologist in Alex Cross. Director Rob Cohen (The Fast and the Furious) doubles down on his casting against type with Matthew Fox as the torture-obsessed serial killer in Cross’ sights.

Author Stephen Chbosky helms the adaptation of his best-selling coming-of-age novel, The Perks of Being a Wallflower. Funny, awkward and heartfelt, the film follows a shy high school freshman and the two seniors who make it their pet project to introduce him to the joys of teenage life.

Funny Business: Rashida Jones co-wrote Celeste & Jesse Forever, a romantic comedy about two high school sweethearts and best friends (Jones and Andy Samberg) who are calling their marriage quits but want to remain friends. When new romantic interests enter the picture, the divorcing couple finds their modern relationship may not be so easy after all.

In Toon: “Animaniacs:” Volume 4 collects the final episodes of one of the best cartoons of the ‘90s. Chock-full of pop culture references, the show follows the insane Warner siblings as they wreck havoc and lampoon Tinsel Town.

The Idiotbox: Bid farewell to a pop culture phenomenon with “Gossip Girl:” The Complete Series. Gain access to Manhattan’s posh Upper East Side through an anonymous blogger who dishes on all of the scandalous secrets, schemes and hookups. Bonus features include: a farewell featurette, an audiobook prequel and more.

Courtney Cox is Jules Cobb, a divorced 40-something mother struggling with restarting her life, in “Cougar Town:” Season 3. This season finds Jules and Grayson ready to get hitched if only their chaotic lives would let them. Meanwhile, her son Travis is lusting after her friend, Laurie (Busy Philipps).

Stranger Than Fiction: With Sam Raimi’s update on the Land of Oz on the horizon, it’s a perfect time to dive into the history behind L. Frank Baum’s classic American fairy tale. The Origins of Oz visits the locations that inspired Baum, talks with family members and reveals the models for his richly imagined characters.

Blu Notes: Liza Minnelli nabbed an Oscar for her iconic role in the classic Bob Fosse musical Cabaret. Inspired by Christopher Isherwood’s Berlin Stories, the film is set against the decadent backdrop of early ‘30s Germany, as the Nazi party emerges. In the middle of it all is a starry-eyed nightclub singer with big dreams.

Gear up for John McClane’s latest action fest with Diehard: 25th Anniversary Collection. Bringing the first four films together in sparkling hi-def, this set also includes a bonus disc that goes behind the scenes to examine the evolution of Hollywood’s most enduring action hero, his enemies and the creation the franchise’s trailblazing action sequences.