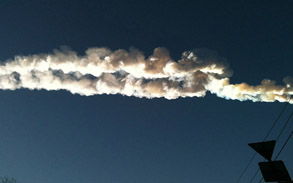 A meteor streaks over the city of Chelyabinsk in Russia's Ural Mountains on Friday morning.
(Credit: Julia Airikh/Itar-Tass/Abaca Press/MCT)

A meteor streaked over the city of Chelyabinsk in Russia's Ural Mountains on Friday morning, producing a blast that injured hundreds, caused minor damage to buildings and temporarily disrupted Internet communication, officials said.

Yelena Smirnykh, deputy information chief of the Emergency Situations Ministry, said 474 people sought medical assistance after the explosion. "Five of them were hospitalized, most of the injuries being cuts by shattered window glass," she said.

Later in the day, Emergency Situations Minister Vladimir Puchkov reported to President Vladimir Putin in televised remarks that more than 500 people were injured, with 112 of them - including 80 children -requiring hospital care.

"It was recommended that work be halted at some enterprises (during the day) so that citizens could go back to their homes and assess the damage," Puchkov said in his report.

An unidentified Interior Ministry spokesman told the Interfax news agency that about 1,000 people were injured, including more than 200 children.

Interfax also reported that the largest parts of the meteor fell in three areas near Chelyabinsk, including Chebarkul Lake.

Roskosmos, the Russian space agency, said it had not launched any objects on Thursday or Friday, Smirnykh said. "At this point we are confident that we are dealing with a meteor rain resulting from the explosion of a large meteor causing flashes and sound shock waves in the Chelyabinsk region and observed in three other regions of Russia too.

"About 20,000 ministry personnel and 3,000 hardware units are now deployed in the area to assess the damage and look for traces and pieces of the meteor none of which had been found yet by Friday noon," she said.

The meteor entered the atmosphere over the north of Kazakhstan and flew over part of Russia before exploding over Chelyabinsk, said Vladimir Stepanov, chief of the Emergency Situations Ministry's crisis center.

"We have deployed 28 stations in the area to monitor radiation levels, which up to now remain normal," Stepanov said. He added that officials did not have sufficient time to issue a warning before the meteor entered the atmosphere.

Dozens of witnesses reported seeing a bright flash in the air and hearing a loud explosion seconds before buildings and houses in the eastern part of Chelyabinsk felt the shock wave from the exploding meteor.

"When I saw some white narrow cloud moving outside the window I ran up to it and saw a huge blinding flash. It was like the way I would imagine a nuclear bomb. At first, there was no sound at all as if I suddenly went deaf," Nadezhda Golovko, deputy head of Chelyabinsk Secondary School No. 130, said in a phone interview on a land line, as cellphone communication was cut off in the area. "Then I started hearing loud sounds of something exploding, four or five, one after another, and then the school windows started breaking."

There were about 300 students in the school at the time, she said.

"Luckily, no one was injured," she added. "But all of them were in shock, especially when we found out it was not a plane crash but a meteor falling down."

Thirty-two windows in the three-story building were shattered, Golovko said.

"No need to say the classes are over for now, much to the delight of the over-excited schoolchildren," she said.

In a nearby zinc-processing plant, part of the zinc concentrate storage facility was destroyed, including its roof, said Natalia Vasilyeva, a plant spokesperson.

"Something big exploded right over the plant. Luckily, no one was killed, but several workers received minor injuries and have already been treated for their wounds and cuts," Vasilyeva said in a phone interview. "Some people thought that the storage was on fire, but what many witnesses took for smoke was a cloud of zinc concentrate powder thrown up and around, resulting from the explosion impact."

Dozens of witnesses shot videos and photos of the incident and posted them to the Web. The Russia-24 news channel aired dramatic images of the destruction at an indoor athletic stadium in Chelyabinsk, where at least two people were seen covered with blood among debris. No one was killed, the report said.

The country last dealt with a major meteor on Feb. 12, 1947, when the Sikhote-Alin meteor, estimated to weigh over 23 tons, exploded over the taiga in the Russian Far East. The explosion created 106 craters over 13.5 square miles of wooded area.

The Tungusska event in June 1908 struck an uninhabited wooded area in central Siberia. Scientists still argue about what the object was but the force of its explosion was estimated to be between 40 and 50 megatons - more powerful than a hydrogen bomb blast.

At a news conference held in Chelyabinsk on Friday, the acting head of the regional branch of the Emergency Situations Ministry, Yuri Burenko, suggested that the meteor might be connected with the passing of an asteroid, known as 2012 DA14, near the Earth.

Sergei Smirnov, a senior researcher with the Pulkovo Observatory, near St. Petersburg, concurred that the passing asteroid might be the source of the meteor.

"According to the video footage we received from the Urals, we are dealing with a very bright bolide (fireball) clearly seen in the morning sky as a very big object causing electromagnetic effects and a shock wave, sending its destructive debris over quite a large territory," Smirnov said in an interview on Russia-24. "It is very good that now video testimony can be collected ... which can help to calculate the trajectory of its flight."

It is still early to speak about the composition of the meteor, which can consist of rock, metal or ice, before parts of it are found and studied, Smirnov added.