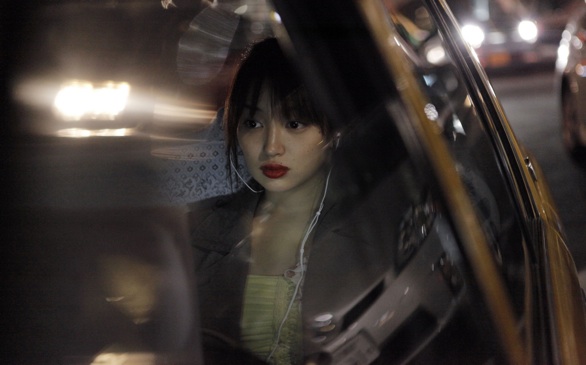 Akiko (Rin Takanashi) in Abbas Kiarostami’s Like Someone in Love.
(Credit: (c) Eurospace )

Iranian director Abbas Kiarostami begins his latest film disorienting the audience in a most subtle and sophisticated manner.

Like Someone in Love begins in a crowded Tokyo bar where we hear a woman speaking but can’t quite figure out the origin of the voice. When the camera finally finds the voice, we see a fragile looking young woman trying to convince her boyfriend she is being honest with him. We immediately notice that she is not, which sparks curiosity.

The film follows a young college student Akiko (Rin Takanashi), who moonlights as a call girl. She has a very volatile relationship with her boyfriend Noriaki (Ryo Kase), and he does not know this is her job. He suspects something is up, but he doesn’t know exactly what it is.

On this evening, Akiko’s pimp tells her she must see a very special client, which is the last place she wants to be. Her client ends up being an 81-year-old widowed, retired sociology professor named Takashi (Tadashi Okuno). A unique relationship unfolds between her and Takashi, and the two lonely souls find out that they need one another. But Noriaki comes to believe that Takashi is Akiko’s grandfather, sparking yet another unusual relationship in a series of unexpected turns.

Kiarostami sets up an eerie feel with the film’s tone and camera angles, and he dictates how the audience sees what’s happening through these camera angles. He creates many intimate moments by shooting scenes that take place in small, confined spaces like a car or an apartment. The audience closely sees what is happening with the characters as the story evolves in a real and honest way. We see that Akiko is lonely in the big city of Tokyo and that she rebukes a visit from her grandmother. You hear heartbreaking messages on the voicemail from her grandmother as Akiko is on her way to see a client. You see actress Takanashi’s face filled with real emotion and sorrow.

There are many illuminating and subdued moments in the film that happen simply through a glance or a small facial expression. No words are needed, and so much is seen in those quiet moments. Kiarostami almost makes the audience a voyeur as we sit in the car with the characters or see action through a sheer curtain. The audience themselves are ultimately thrust into the story, becoming spies of some sort.

The restraint used in this kind of filmmaking proves that less can be more. The realism makes you want to know these characters and what has transpired in their lives: Why does Takashi have an estranged relationship from his own granddaughter? Why is Akiko distancing herself from her grandmother?

Like Someone in Love keeps you guessing, hopeful and anxious all at the same time. What we choose to believe when we know it to be a lie is a message deeply rooted in this film.

Like Someone in Love opens today at Laemmle Royal Theatre in West L.A. It will expand to include Laemmle’s Playhouse in Pasadena, Laemmle’s Town Center in Encino, and Regency’s South Coast Village in Orange County on Feb. 22.