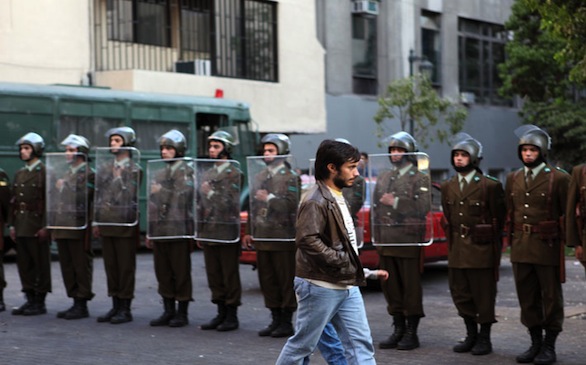 Gael García Bernal was not shy at all in confessing the challenges he faced while portraying his character in No.

“Any role always has its challenges,” said Bernal. “But for this role, I would have to mention that the Chilean accent was a big challenge.”

Under the direction of Pablo Larraín, the Mexico-born Bernal plays René Saavedra in the Chilean film No, which has been nominated for Best Foreign Language Film for the 85th Academy Awards. His character is a big shot advertising man during the reign of General Augusto Pinochet in 1980s Chile

Excuting the Chilean accent was not the only challenge for Bernal during the filming process.

“We wanted to create a character that had this otherness, this foreignness in his own country not only from the exile but also from working in publicity, and looking at things in a more childish and technical way,” he said.

Bernal also mentioned that shooting nonstop for about seven weeks with two cameras and digital recordings could be considered a challenge, among others.

No focuses on Saavedra’s ideas and efforts of an advertising campaign that leads to the end of Pinochet’s rule. Allegedly, Chile saw many killings, human abuse and a dictator-type period under Pinochet's reign.

“In general, I feel this character is the result of a social and biological process the country had at that time,” Larraín said of Saavedra’s character. “I’ve always found it interesting how Pinochet imposed a socio-economic model and that model brought with it publicity, and it's these same publicity tools that drive Pinochet out of power. Rene's character comes out of this dictatorship and is later exiled.”

Regarding Saavedra’s character, Bernal added, “There are also two important factors: One, he was sought after by political parties because they needed his help in constructing a message to get people to vote. And two, he was an exile, and it's important to highlight what caused his exile, how Pinochet's politics eventually allowed his return. It alludes to classical and Shakespearean literature, and how the exiled hero returns.”

No has received a lot of recognition that its nominations and awards keep coming. Everyone seems to be keeping a close eye on this picture, and Bernal makes note of that.

“For the film, it represents a great opportunity for it to be seen in many different parts of the world,” he said of the Oscar nomination. “It's immeasurable how much more people get to see a film once it's nominated, especially this category – one of the most contested, one of the elites. Of course, this is subjective. There are many great films not nominated. Filmmakers from all over the world are making great films now, and to be a part of that is a great privilege. I know many people say that just being nominated is an award in itself, but when put in perspective, it's quite fantastic that out of 70-plus countries, this film got nominated not just for Chile, but for all of Latin America.”

Larraín, who is of Chile, claimed that this movie was made in a very private environment without projections or pretentions.  Additionally, he concurs with Bernal’s point of view.

No is now playing in select theaters.