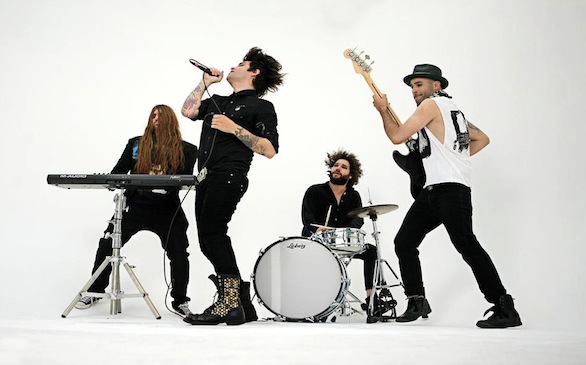 Brothers Kinski and Rodax Gallo were a major part of the rock band Monte Negro, but that’s over. Nowadays, it’s all about Gallo: a multi-cultural music group that was made organically.

“It was something very organic, very natural,” said Kinski of this new and fresh entity. “We had been talking about it for a long time.”

Kinski mentioned that there was instant chemistry with the new members of Gallo. Everyone had and still has the same mindset as well as a common mission to collaborate as musicians. The result is something more creative and electronic, according to Kinski.

After 10 years, the Guadalajara, Mexico-born brothers decided to give Monte Negro a rest and embark on a different journey with diverse ideas.

“We went with Gallo because it's a more simplistic concept,” said Kinski. “Also, Montenegro didn't receive a very good reception in the States, so we decided to give something different a try.”

Gallo, which officially formed in 2012,  honors the brothers’ musical influences over the years. Their influences range from electronic to disco, and punk rock to pop. All of that is displayed in the band’s album trilogy: Fuego (Spanish), Phoenix Rising (English) and Mamawe (bilingual).

“I would say if there is any one particular genre that ties the trilogy together would be electronica,” said Kinski.

As of now, Fuego (Fire) is the only album out on the market.

“Going into it, we already had a substantial amount of material,” Kinski added of the trilogy. “And I decided I wanted to create something similar to the integrity of what we did in Monte Negro, but a bit more colorful.”

As most singers and musicians, the Gallo brothers’ first experience with music came when they were kids. Their father sang in a mariachi group; both brothers would travel with him to performances. Most often than not, they would sing along with their father. That’s how and when their passion for music developed.

“Overall, our family is very musically inclined and living in such a densely-populated and diverse neighborhood, we were always exposed to all sorts of music, both Mexican and from other places,” said Kinski, who noted that his father provided something very integral to his musical development.

His father would teach him how to sing in the mornings and how to harmonize, skills that are very fundamental, according to Kinski.

While Kinski has shown to be rock-inclined, other family members illustrated passions in punk music. Both parties found common ground in romantic songs. Interestingly enough, artists like Pedro Infante, Ramón Ayala, Radiohead and Massive Attack have served as an eclectic mix for the Venice, Calif. natives.

Though they’ve utilized those musical influences throughout their career, Kinski suggests that their inspiration when writing tracks stem out of a variety of things.

“Life, love, apathy. Sometimes from one's inability to change things, that frustration from life experiences and how the world is a series of complicated events,” he said. “With Gallo, we want to convey a less complicated, more upbeat message…”

But what’s the main thing that Kinski wants the public to know about Gallo?

“We want our fans to think of us as good food, very light-hearted, yet enjoyable with a lot of substance,” he said. “We want people to know that we have a very upbeat mentality, very relaxed.”