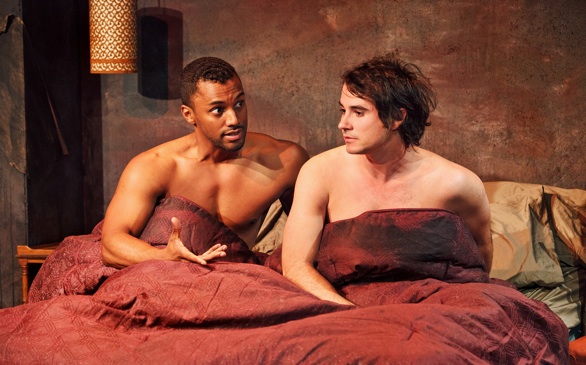 The bed has an important role in the play; it shows the characters at their most vulnerable states.
(Credit: Danielle Larsen)

Brutally honest and surprisingly funny, “A Family Thing” takes us on an emotional ride with three conflicted brothers: a coke addict (Saverio Guerra), a felon (Johnny Messner) and a gay writer (Sean Wing), who are all trying to turn their lives around, but ultimately find that life has a different plan.

The show starts with Sean Burns, played by Wing, running to the edge of a building, ready to jump. There he meets life coach Joe Wheeler (Darryl Stephens), and the two immediately hit it off. Soon we find out Sean’s older brother Jim, just released from jail, promised to kill not only him, but their older brother Frank, as well. The three work toward reuniting, leading to a heartwarming and altogether heartbreaking tale.

It’s a gritty semi-autobiographical story with clever one-liners, and the incredible actors shine throughout the play. Guerra, an accomplished TV actor, steals the show despite an almost annoyingly flawed character. A coke-addicted, escort-hiring adulterer with an autistic son, Saverio manages to spit his lines out like fire with a passion and anger true to the character he plays. Anytime he’s on stage, he’s the star.

Stephens plays the perfect boyfriend: cute, supportive, funny and always there for Sean. He’s a character full of melodrama, yet vulnerable and relatable at the same time. Messner plays the rough-around-the-edges felon, and his girlfriend, Louise (played by Elizabeth Regen), is the only emotionally stable character, despite her criminal past and tacky appearance. She becomes a breath of fresh air amid constant yelling and strife.

The staging is perfect; it’s simple and allows you to focus on the heavy material, and it’s not distracting. In fact, it's easily adaptable. The bed, just off center stage, should have its own credit; it serves to literally and figuratively denude the characters, showing them at their most vulnerable and exposed states.

Most impressive is the balance between the emotional story and the quick-witted humor. After a tense showdown between Sean and ex-con Jim, Jim approaches Sean’s boyfriend Joe and tells him to be good to his brother. The theater is silent. Finally, the silence is broken by Joe, who says to his boyfriend, “Your brother is so hot!”

It’s hard to tell what’s true to life and what isn’t, but it’s obvious Peabody award-winning playwright Gary Lennon is giving us the story of his rough and tumble upbringing on the New York streets. Like lead character Sean, Lennon lost his parents at a young age. With an older ex-con brother and another who’s an addict, Lennon can relate to the characters he created, sharing a common ground.

In the end, one theme is evident: family does not have to be blood-related. As Joe says, “The greatest family you can have is the one you create for yourself.”