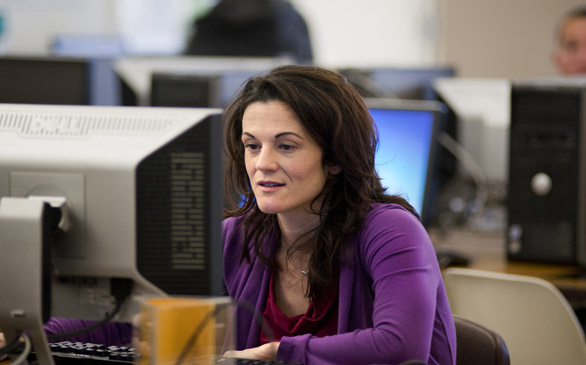 Many students, such as Elisa Allechant, study in a computer lab for online classes.
(Credit: Autumn Payne/Sacramento Bee/MCT)

Targeting a tech-savvy generation, they are paving the way for more students to pass courses and obtain degrees without ever going to class.

Given budget constraints, they say boosting online programs is the only way to accommodate more students without expanding campuses and making higher education even more expensive.

"There's not a luxury of sitting in the present trajectory, unless you don't mind paying ever-increasing tuition," Brown told the University of California regents last month.

Distance learning has been around for decades, typically as a means of offering extension and enrichment courses, but the new wave goes far beyond recorded classroom lectures. Online courses can incorporate face-to-face interaction via Skype, as well as chat rooms, blogs, discussion forums, electronic tutoring, instructional games and push-button audio or video.

Students can use online classes to tackle studies at any hour, from any location. Colleges can use them to unclog bottlenecks that keep students from obtaining vital courses they need to obtain degrees on a timely basis.

But the landscape is dotted with obstacles, including course development costs and concerns about academic rigor, faculty acceptance and adequate student assistance.

Teacher representatives at all three levels of California colleges and universities say they do not necessarily oppose online instruction. If it must be done, they say, care should be taken to maintain faculty control over content, preserve teaching jobs and ensure that students have an adequate opportunity to obtain individual assistance.

"All of it is worth experimenting with. Nobody opposes it. We don't think it's a bad thing," said Lillian Taiz, a professor and president of the California Faculty Association, which represents California State University faculty. "But I think we have to be realistic about what we're doing, and at the very least, we have to do no harm."

Behind the scenes, online education is a massive industry, with private firms offering a range of high-tech products, from computer software to flash cards and safeguards against student cheating.

"I've seen people where you can see the dollar signs in their eyes - they just want to write a program and have you write a check and think they've solved the problem," said Joan Buchanan, chairwoman of the Assembly Education Committee. "We have tremendous potential with all of this. We just need to make sure that we maintain the integrity of the system."

Cautiously, California colleges have been increasing the number of credit-bearing courses that are presented entirely or partially online.

Nearly one in four California community college students is expected to take at least one online course this year. Almost half the state's 112 community colleges offer degrees and certificates that can be obtained without ever attending a campus class. Even so, enrollment bottlenecks at community colleges meant nearly a half-million students were on course waiting lists last year.

San Jose State University launched an online project last month in which it is teaming with a Silicon Valley start-up, Udacity, to offer two math courses and one statistics course to 100 students apiece. College credit will be given, with enrollment open not only to San Jose State students but also to veterans, military personnel and high school and community college students.

CSU started a systemwide program last month, California State Online, providing opportunities to complete course work for a handful of degrees to students who have acquired some CSU units but are having difficulty attending class.

To accelerate the push, Brown wants to make a nearly $37 million investment.

His proposed state budget includes $16.9 million for community colleges and $10 million apiece for the UC and CSU systems to expand online options for hundreds of high-demand, prerequisite courses that fill up quickly.

"I just don't see how it's possible to expand access to the University of California under current economic circumstances, and future ones, with a brick-and-mortar environment," he said. "I just don't see it getting done."

How well online education works is still under study.

A U.S. Department of Education analysis in 2009 of dozens of online education studies concluded that students who complete such classes learn more, on average, than those taking classroom courses, perhaps because they can repeat lectures and exercises as often as needed.

Reviewing the same online studies, however, the Community College Research Center cautioned that participating students tended to be prepared for college, so the findings might not apply equally to under-prepared students.

In California, community college students who take courses online are less likely to complete them than their peers in traditional classrooms, recording success rates of 57 percent vs. 67 percent respectively, in 2009-10.

Andrew Campbell, 20, of Modesto Junior College, said his mother used online courses to go back to college for a master's degree. But Campbell prefers campus classes - he struggled with several online courses and dropped one, he said.

"You can try to communicate with instructors over email, but they have 500 students or something like that, so it's difficult to get in touch," Campbell said.

Victoria Chernyetsky, 21, a law firm employee who attends CSU Sacramento, said she has taken several online courses - recently Human Resources 101, which "I absolutely had to take and the only class available was online."

"For people like me, who are working, it's an amazing thing to be able to do everything on our own," she said. But "online you don't get a professor explaining things to you, you just kind of have to figure it out on your own."

The history of online education is littered with failures as well as successes: the University of Illinois and Columbia University, for example, launched aggressive online education programs years ago that folded because of stiff competition from the private sector, weak enrollment and economic woes.

Teachers are particularly wary of a new front in distance learning, called Massive Open Online Courses -MOOCs - taught by private firms such as Udacity that enroll thousands of students in a single class, often free, though typically without major college credits or significant individual help.

Sebastian Thrun, a Stanford University researcher and one of Udacity's founders, demonstrated the potential of MOOCs to reach vast audiences in 2011, when he and Peter Norvig, Google's director of research, offered a free introductory course in artificial intelligence. More than 160,000 people worldwide registered.

Brown's proposed $37 million investment in online instruction is not meant to create new partnerships between colleges and MOOC firms.

But joint efforts are being tested. The San Jose State pilot program with Udacity explores a possible marriage in which the college controls course content, student testing and awarding of transferable credits, while Udacity provides computer expertise, coordination and help in fine-tuning presentation.

UC Irvine is trying a different model with a different MOOC firm, Coursera. Six of the university's courses are offered free or at low cost online - two for college credit - to students worldwide.

Dean Murakami, an American River College instructor and vice president of the California Federation of Teachers, which represents community college instructors, said faculty would have serious concerns if the future leads to massive online classes by public colleges.

"There's no way that you could have the kind of interaction that we think is necessary," he said.

Though maximum class sizes are sure to spark debate, online education offers advantages for many.

For rural residents, full-time workers, people with disabilities and others who find it difficult to travel to campuses, online courses create a push-button alternative.

Elisa Allechant, 36, said taking an online class each semester at CSU Sacramento has provided flexibility she needs in parenting a 7-year-old girl. "It's difficult to be in school and match it up with my child," she said.

Michelle Pacansky-Brock, an online instructor at Mount Jacinto community college, said that distance learning also can be "incredibly dynamic." Rather than write an essay, for example, students can use a cellphone to shoot videos or interview people worldwide.

Pacansky-Brock recalls a dyslexic student in an art class who struggled to express her feelings in writing but blossomed when interpreting art through audio comments she submitted.

"I remember sitting there listening to her comment and my eyes welled up with tears," Pacansky-Brock said.

Michele Foss-Snowden, who has taught a CSUS public speaking course with online curriculum, said teacher preparation and creativity make a big difference in quality. She supports Brown's push only if careful thought is given to how curriculum is presented.

"If throwing money at it will result in better, not just more, then I'm all for it," she said.